My Most Prized Possessions (Part 2)

Well I think its about time these guys got a new post all together, with four new additions to the family no less! Today I’m introducing an Iron Hand, White Dragon, Raptor and Salamander. For those of you that haven’t seen my first article, these are the unwilling volunteers to the ranks of Thousand Sons’ Possessed Space Marines.

First up the Iron Hand…

pretty fond of this one. My friend who I got it off was never really that into the building stage of the models… (or the painting to be honest). This explained his incredibly weird and dorky stance. I don’t know if his legs are meant to look like he is running, I assume so. However his body and arm position made him looked like he was he was heavily leaning forwards against resistance of some sort, not helped by his spike hand touching the floor for extra purchase. I couldn’t get passed the idea that this guy looking like he was dragging something. So I looked through my spawn parts… found a part I never really liked to see if I could make something out of it. I got the weird claw that has all the fingers in the same plane… which I hate, so I cut all the fingers and turned then to face sideways like a clawed hand. It was massive though, like, almost the size of his body. Hilarious I thought, the daemon has warped his hand ludicrously and now he has to drag it around and swing it like a gross wrecking… ummm… sea urchin?

I attached it by using an already curved spawn tentacle I think, and I bent it straighter, carefully so it didn’t snap or crack. I’m not sure if i also pinned them… then I extended the armour trim down the arm to tie it all together visually using green stuff. That was what I had done some time ago before I decided he would be an Iron hand. I thought, well it does make it sound like his hand is heavy… maybe I could just paint his hand silvery? but it looked too organic now. I thought about it for a while then decided I need to tech him up a bit so he felt a bit more Iron Hands. 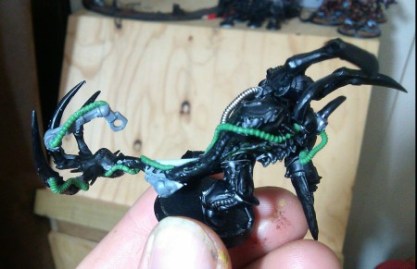 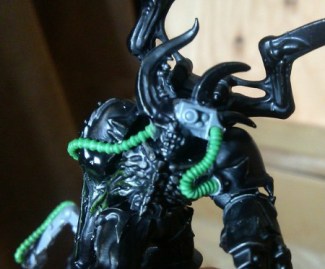 As I’s already experimented a little with the tentacle maker I felt a bit more confident and mad some cabling with it. In his arm I also incorporated a resin tube, guitar wire and space marine elbow. this was so that it brought the idea back that this was not a daemon arm… but his own warped arm. finally… Iron hands have mechanical hands… but i wasn’t about to try and scratch build a new, entirely robotic hand. bit i dint want to use any of my cool robot parts i’m saving for a Dominus conversion. I needed to find some bionic looking bits. in hope i checked the box of vanilla marine i bought, in hope… I needn’t have bothered. I couldn’t find any bionic marine parts. Then I noticed something, a little mechanical loader arm for the space marine rocket launcher. Its part of the backpack, but I managed to cut it away and it was like the perfect dimensions for me to replace one of the fingers on the comedy hand. I popped it on and plugged it in. Very happy with that.

Im pretty sure his face bionics came from the vanilla marine box as well, but I’m not sure what. Again, if you can pick it out please let us all know, I’m just not that familiar with standard space marine equipment. Where ever I found it, it had lenses… it was going in his face. I fitted it, plugged that in too and then put some of his horns growing out of the new part to help tie it all in. 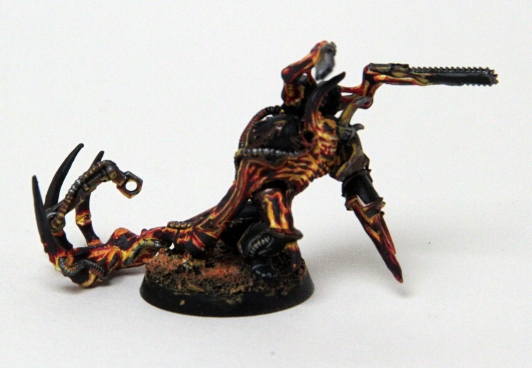 As you can see, rather than go with just painting parts of him metal, I felt inspired after seeing Prometian Paintings army, to give him molten skin, and I cant be grateful enough for the Tutorial he provided on his site on how to do that.

Next up is the White Dragon, a custom chapter belonging to @lambert2191…

So this second one was the first really elaborate on I did, since it was one of the early ones I dont have any WIP photos. The original idea behind it was when I was making the Imperial fist, which has the same chest piece, I thought “what if it was the Armour that got Possessed and the Marine just happened to be in there?”. Using mostly spawn tentacles I built the bulk of it and made it kind of like an exploded diagram… this was also made shortly after I’d watched The Thing prequal, and is there for my original Thing Marine (more on my proper Thing Marine in the future…).

I added some squiggly little tentacles with green stuff, coming out of his armour gaps and out by his head. I wanted the space marine to be an afterthought to this invasion into his armour, like the Daemon barely noticed it was even in there, so I cut the head back to the face and tried to make it look like it was being absorbed into the collar of the armour. The Backpack is one of the awesome Chaos Space Marine backpacks from Space Crusade and the claw of the left hand is the same as the one on my ultra marine but I cut the sword off it to create variation. I also lined up the horned shoulder pad with one of the weird jutting tentacle spikes so it looked like it had lifted through the armour 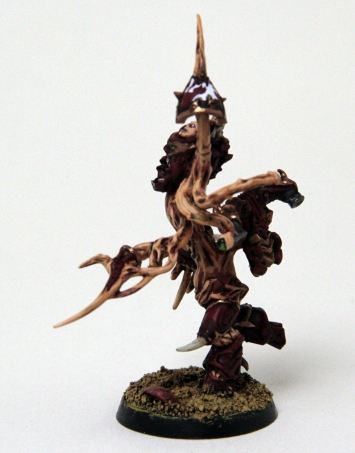 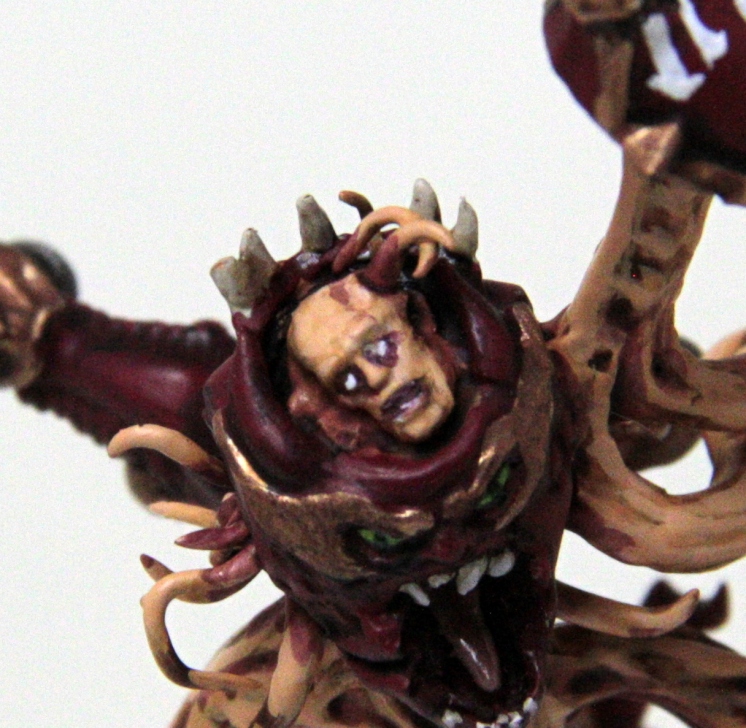 When I painted this guy I definitely wanted there to be a feeling of warped flesh, rather than gore. The Possessed Armour is just using his body to amble around however it feels like.

The third addition to the ranks of my Possessed in this post is the Raptor and a sort of cousin to the The Possessed Armour, as it was also inspired by the film The Thing, but this guy is a little more Gruesome.

Now until very recently I had no allegiance for him. At one time it was going to be an ultra marine because of the little arrow on his head and then a Thousand Son when I had made one of all of my friends chapters… However I decided that if one of my Thousand Sons Sorcerers falls to the flesh change… it will be significant, and I think I will be making and ex-sorcerer Spawn at some point. So I started thinking about the colours his new bits were going to be and what colour would compliment it well. I regularly listen and interact with White Metal Games on Twitch and a nice guy there called Andy suggested Raptors after I said the other main colour would be red, and obviously green is opposite red on the colour wheel so the Raptors military green could work well. Coincidentally, the other model I would be painting simultaneously would be another red and green model, but with a different take. 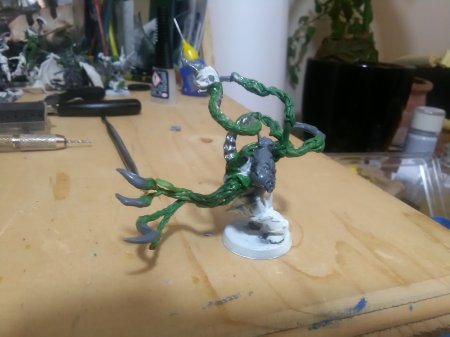 My original adjustment to the possessed model until my renewed enthusiasm for this project was just to give it the missing backpack from Wingman and also, Wingman’s missing shoulder horn is now on this guys head. Obviously I gave him new arms, they started off as paperclips that I bent into a dynamic thrashing position and then green stuffed over the top. For a long time some of the whips didn’t have ends or any green stuff on at all (probably because I found the task too daunting. Anyway eventually I finished sculpting them and for some of the ends I used either Daemon Prince fingers or the wibbly slug fingers from the hand of the Khorne AoS Helbrute thing. The long squiggly neck was a bit of an after thought and the last thing I added, it was the “body” left over after using the head for the Black Templar Possessed.

Someone asked me on Bolter and Chainsword if one of my models was based on Venom or Carnage, two Villains from Spiderman. It ‘ the case but this guy has reminded me of Carnage’s ropey limbs, Even more so since I painted him.

The final addition to this currently twelve strong unit is the Salamander. I really wanted to do a good job of this guy as its one of my co-authors on the blog, Warbringer who collects Salamanders… so I really wanted this model to have some “Wow!” factor.

So… you can see the original pre-upgrade model was pretty plain. Before my big Possession drive it was just a standard possessed but with a Grey Knight Rapier added and given serration. I had an idea, possibly one of my first really ambitious sculpting ideas, in this next picture you can see his additional scaffolding and Green Stuff, This would be the beginnings of my concept for this possesion… FIRE.

I decided that this guys would be possessed by the very fire he previously used to wield. I also decided that the Daemon would be in the fire as well as his soul and physically manipulating him as he walks accross the battlefield. So now all I had to do was… sculpt… that…

At this point I was just adding to the frame to give more for further green stuff to stick too. Oh and the keen eyed among you will noticed I used GW barbed wire for the frame. I figured that the green stuff would hold onto this wrapped wire better than any other wire I would use. 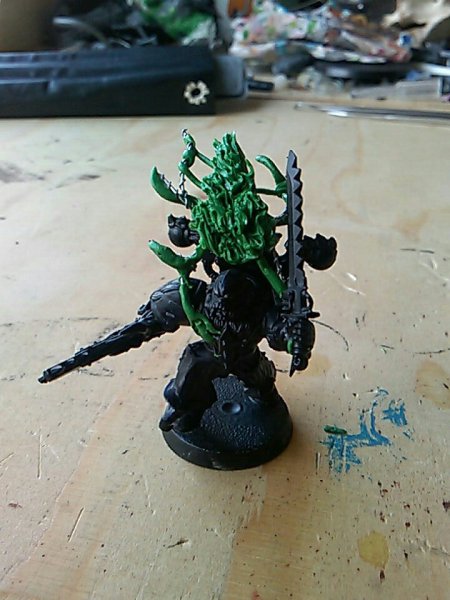 Here you can see I had a crack at the face in the flames. At this point, while I was sort of happy with how the face was going, I wasn’t convinced that I would be able to make the fire look good enough. Doing a few flames here and there is one thing, but I wanted him to look like he was ON fire. 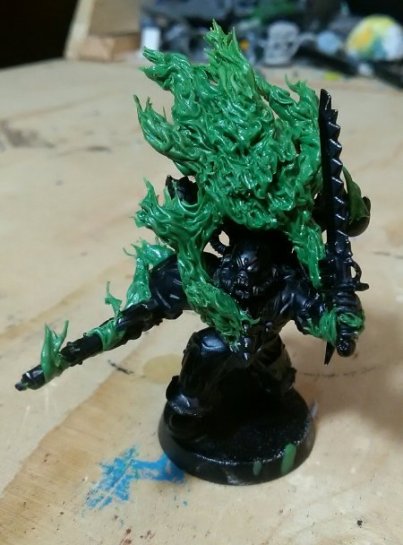 I was pretty pleased with how all the sculpting went at this point and then I went about painting him… and deliberating in grate detail how I should paint his armour… mostly because i was putting of painting ALL OF THE FIRE. I’d never painted fire before so I watched Warhammer TV’s Duncun doing a Tutorial on painting fire. It helped but I still didn’t feel that prepared, but eventually I actually painted the whole thing inspired by Azazel’s deadline for his June-It Challenge. 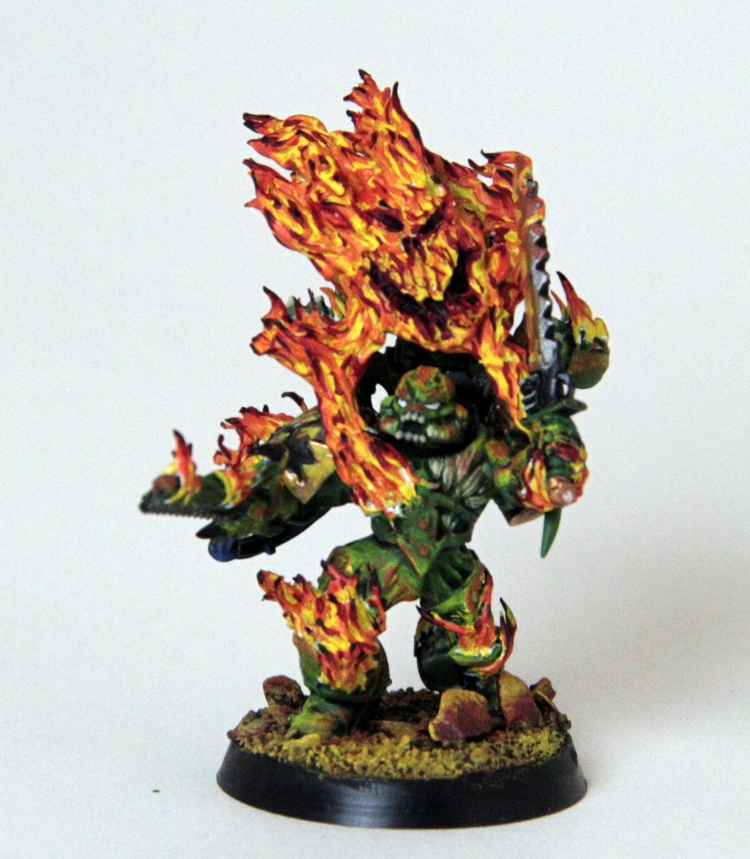 Im very happy with how my first attempt at painting fire turned out and ready in time for the June-it Challenge!… ish… I was actually a day late, even after trying to paint all of the fire in the hour or so spare I had before bed on the last night. Fortunately for me, Azazel is a benevolent being and told me to enter my twelve strong unit anyway. even though only 5 would have qualified for a unit, I wanted to finish painting all the ones that were ready to paint finished. yey me!