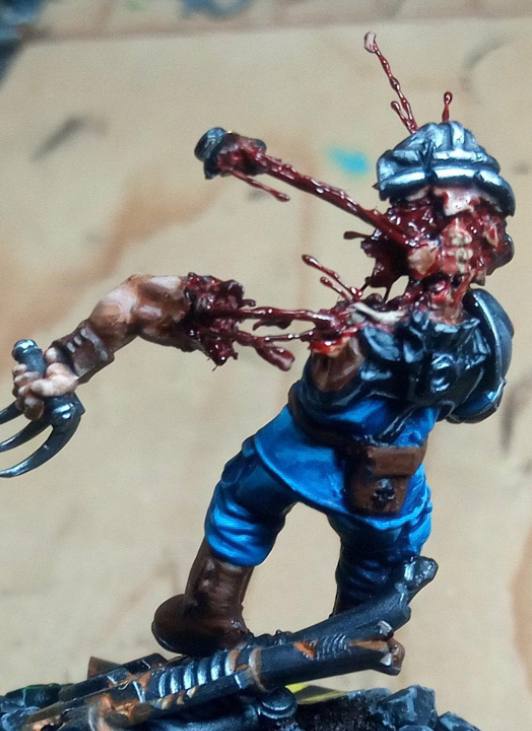 Pit on Parade – The Bone Collecter

Dipping my toe back into the blog pond, Id like to let everyone know about this project. It was a kit bash for a charity project and the brief was pretty loose… Someone/thing that you would see on a fringe gladiatorial, pit fighting world where anything goes. This was to let people really have fun with their imaginations and give them room to contribute something to this very cool community project.

Briefly I’d just like to mention that I have been suffering from some MAJOR hobby funk. I completed this mini in November 2020, then I did a secret santa for that… then 2 more minis for a charity project by the end of March 2021. Its now June 2021… so I’ve completed 6 minis in the last 8 months and I haven’t actually picked anything up for the last 3 months. I’m hoping that Getting some games in as lockdown (during the global pandemic if you are reading this from the future) eases as well as posting about some of these things helps me get back into the swing of things.

So the basis for this project was Pit on Parade. It was organised by the very awesome @Dave_the_Dr from twitter, who during the 2020 Covid pandemic, wanted to do some sort of event that would pull the community together for a good cause. The basic premise was, an armies on parade board to be entered into the virtual Armies on Parade for Games Workshop that year. The army would not be a faction but a collection of converted/painted minis from across the community, that after entering would be raffled off. We weren’t expecting to actually win anything as it was a completely illegal entry, but winning wasn’t the point. I wont get into the whole over arching project here, but you can flick through peoples contributions and the projects progress on twitter under the #PitOnParade hashtag and its worth mentioning… We did actually get recognition from the Warhammer Community Team, which was epic.

My contribution was to be a Pit fighter, I wasn’t sure what I was going to make or what parts I was going to use. I have a box of bits that I use for sending out to people to take part in a kitbashing competition and while I normally avoid dipping into it (the pieces in there are donated for the competition), since this was for charity I did have a rummage through it so I could try to make something decent.

I had a spare Abominant for my GSC and as a pretty beefy, monopose model I thought that it would make a pretty good base. I wanted the pose to be dynamic so after looking through the bits I found I thought a huge lunging punch would could be quite cool. I gave it head with an open shouty mouth, but didn’t like the top so replaced it with a creepier blindfolded one. I also wanted to include some mutations/augments given the setting so a robotic arm and a Total Recall inspired parasitic twin did the job.

I needed to find some legs with the left foot forward and also I wanted something to break up the back and make it more interesting. I found giants sack and that’s where the premise for the character was born, it would be a trophy collector henchman to the Pit Boss. Since he was meant to be one of the heavies for the main guy this did put some pressure on to make him seem appropriately imposing in the face of all the other wild ideas people were coming up with.

I had to throw on a bunch of Green Stuff for gap filling and building up some muscle and cloth.

Soon enough I had to think about basing and although i was happy with the posing of throwing a huge punch with a massive fist… I wasn’t sure if it was enough to capture the moment just before he punched his opponent. I was on the clock though, I had about a month to do this model and I was starting to worry that I didn’t have enough time to do much more, especially since I’m not renowned for painting particularly quickly. So I thought… what IF… just what IF I bothered to try and add a bit more, maybe something to signify how dangerous this individual is. Something like… saaay, someone being punched. Really, really… REALLY hard.

So after scavenging a few more parts, I built a little chap to take one on the chin for the team. I had him flying backwards but I still needed to express the level of impact he had taken so then I had to get to work on his arm and head via the use of some thin brass wire and tooth brush bristles.

Then I had to get the the main guy painted up too. In an effort to practice my painting and improve the representation of my minis I decided I wanted to paint this guy up as an ethnicity other than white. I put up a Twitter poll to see what everyone else thought and it came back with Native American/First Nation. So this was a challenging paint job which I spent quite a lot of time on.

I know the photos aren’t very fancy, but I’m not a very fancy guy. I’ll try to get some better quality ones up soon enough but that’s how it turned out! The board was well received by Games Workshop, by the Community and made about £600 for charity. So I couldn’t ask for much more than that, it was a pleasure to be a part of this project again and to work with Dave and Andy on something again since Purge the Pit.

I hope you all like what I came up with, let me know what you think! Hopefully I will find my muse and feel inspired to get to work on some more projects soon.