Whats that? I haven’t made enough Possessed you say? well here’s one I made earlier! a surprise reveal of my Plague Bearer Possessed.

Ok, now I’m getting back into the swing of things! Not that my work at home is finished… but I’m waiting for deliveries so I can just not think about it for a while. Also… its not as if I’ve suddenly become ultra productive and made this since the last post, I actually made it ages ago while working on the others but because its not painted it never made it to post. There’s a reason its not painted though, but I’ll get back to that.

So for this one I had a a bit of a play around with the Nurgle aesthetic. I hadn’t until this point done any Nurgle conversion and I thought it would be fun to possess a space marine with a Plague Bearer Daemon. At one stage I knew I would do this but assumed it would be for a Deathguard, but then I realised that since those things are so messed up anyway it would probably be hard to see where one ended and the other began, so I decided to figure out the host faction later.

Krakendoomcool collects a whole host of cool Nurgle Chaos stuff, including daemons, so he helpfully donated some Plaguebearer bits to me when I spoke to him about this. That and my trusty box of vanilla marines was to be the basis for my possessed.

So I stuck together a few parts, keeping the Space Marine leg, arm, chest, helmet at sword. I was missing a right hand holding a melee weapon from either pile of sprues so I decided to have the weapon jutting out of his wrist with the possibility of Green Stuffing a hand around it later. I could have just gone with a plague sword or something, but I wanted something a bit more unique and I know that flails are a bit of a Nurgle weapon, so I decided to try and make one. Using 2 of the 3 circles from an Icon of Nurgle, I put them back to back to make the flail head, offsetting the spikes on one of them. The chain I’ve used before on Stompy the Looted Carnifex‘s reins has these weird rectangular links with not a lot of room, which make it quite stiff and use useful for posing (with the application of some glue). 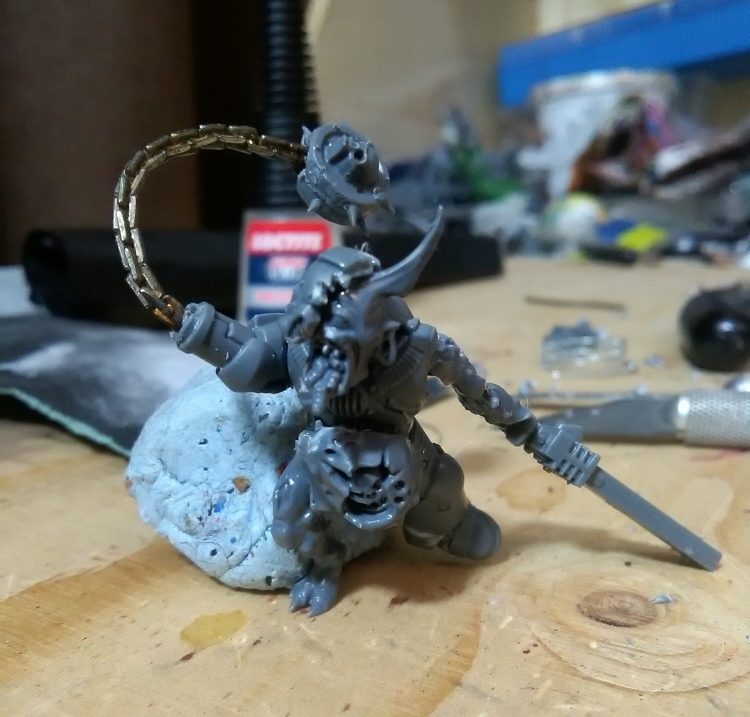 I was happy with this posing, the idea being that his old armour and weapon had been rendered useless and how his Daemon parts were just dragging these redundant parts. My feelings that he looked a bit to small were confirmed though when I showed it to Krakendoomcool. So I straightened it up a bit, bulking out some areas and green stuffing over the gaps.

While I was doing this I started to have concerns that this just looked like a Plaguebearer that decided to try on the latest in Power armour fashion. I needed to make it look like, this wasn’t just another plague bearer infected individual, but the essence of a plague bearer having forced it’s way into the body of a marine with some additional Nurgley side effects. The first step toward this idea was trying to avert the classic skinny, pot bellied plague bearer look. I had already chosen a different weapon which helped. I knew Krakendoomcool made use of spare Green Stuff to make maggots, so I did the same and decided to have them spilling out of him. He already had a few in his mouth so I glued a collection of them spewing out there and also some pouring out of a hole in his leg armour. There was also the left hand, which was a space marine glove holding onto a sword… at the end of a Plaguebearers arm. This looked a bit too obviously cobbled together so I made the glove look like an unarmoured hand. I also wanted to have his guys spilling out of a huge fatty gash in his side… So I started the lower half because I figured it would be to hard to do it all at once.

After that I did the top layer of the split and the guts spilling out and also added another shoulder pad. 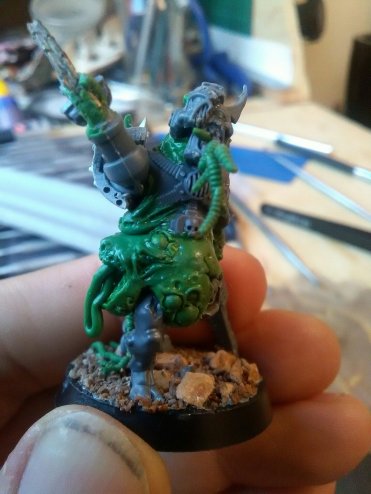 The right shoulder is a possessed/chaos looking shoulder pad but the other I added was a plain one so I knew it would need some alteration.  I was getting worried again that it still didnt look possessed enough and still resembled a simple Plaguebearer in some looted power armour.  I chatted to reliable and helpful hobbyists on twitter, @Trolldrengi and @Synchroneyess who confirmed my thoughts. So I wanted to add more armour and get that feel of “this used to be a marine”. Even after the shoulderpad something felt like it was missing… then it dawned on me that one of the iconic aspects of a Space Marine is his power pack. In an effort to avoid it looking like a Plaguebarer had just strapped one of those on too I decided to try and have the Backpack being Absorbed into the Possessed Marines flesh. 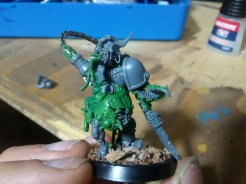 After I put the shoulder pad on… unsurprisingly there was a lot of room around it where  his spindly little Plaguebearer arm was coming out. So looking through my bits I found a couple of horns, of a sorcerer helmet and a daemon prince head, which I turned into tentacles worming their way out of the gap.  This also gave me another idea, as tentacles are a Nurgle thing but don’t appear on Plaguebearers… at least not to my limited knowledge, so I decided to forget sculpting the right hand and just have some tentacles holding onto the chain instead, further distinguishing (I hope) the difference between a Plaguebearer and a marine that has been possessed by one. 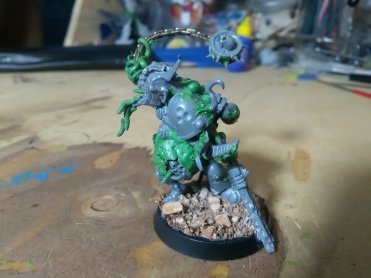 So thats it! pretty happy with how it looks and as far as Im aware this is how it still looks. Why don’t I know, well thats the collaborative aspect of this project. Krakendoomcool is going to paint it for me! As I mentioned in my last post, up until now I never posted Works In Progress, I only liked to post finished things, so my intent with this was to wait until it was painted… but I’ve been looking for ways to get back into hobbying and I figured posting about this guy would help. When Krakendoomcool paints him up he can pop his own post up.

Oh I almost forgot! the host faction? well I wanted a complimentary colour to the drab greens and grays of the Nurgle colours I expected him to be… so how about bright pink! Emperors Children it is, and I cant think of a more fitting end to a Marine who prides himself on perfection, than to meet my Thousand Sons and be reduced to a rotting, shambling mess. Plague Child is born.

I hope you all like him, especially those of you who are connoisseurs of Nurgles garden. Let me know what you think, what do you like, what could I do to improve on it if I did something again in the future? All of your comments are welcome and encouraged as always.