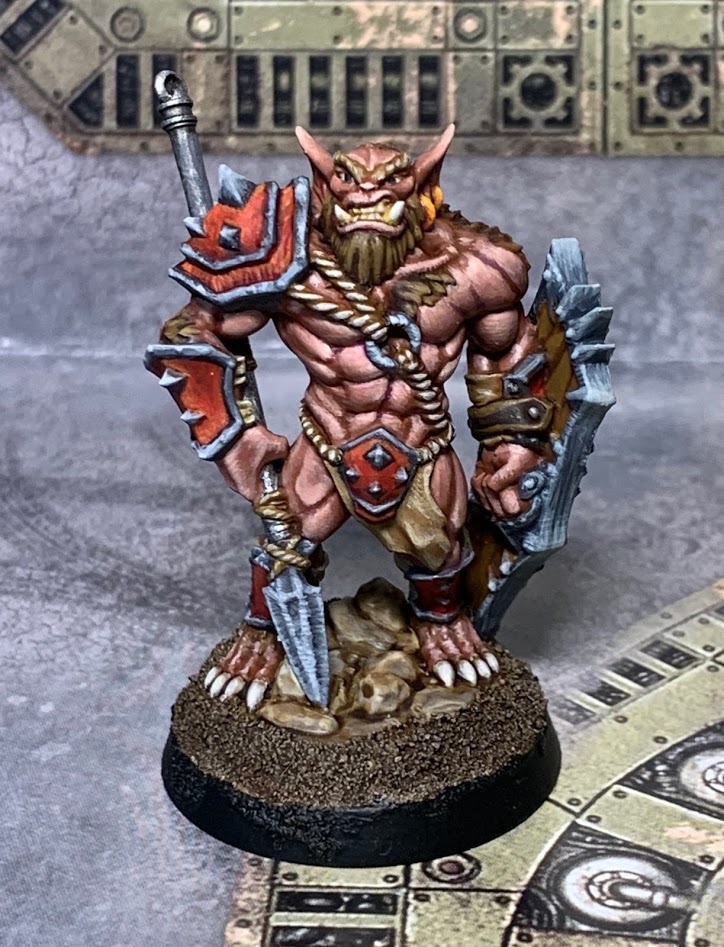 Do you have 50 shelves of grey? Hopefully you have less now after joining in with everyone else on the #12monthsofhobby challenge! Months 5 and 6 are upon us and I’ve been excited to write this post and see peoples progress!

12 Month of Hobby – each month you aim to “Finish” one model from your backlog and using the scoring I’ve devised below the aim is to be Hobby Neutral / Hobby efficient. Basically you finish and paint as much as you buy.

Overview
The 6th month of this year’s challenge of 2020. You can catch up on the last months by using the search bar above and selecting the 12 months of hobby category.

Progress enables progress – There is no failure.

With that lets see how everyone got on!

I’m a bit ashamed with how few I’ve painted this month.
I couldn’t find much motivation other than building my new Iron Boss that I received from Artel W.
Hopefully next month will be better !

Finally finished all the models from the first strike box. Really enjoyed painEnjoyed this month after a slow start, good to paint something a bit different too. I kept the scheme simple on the nighthaunt, and tried to concentrate on quality. I was also good to go back to finish off some almost done older models – the mixed necromunda/chaos cult.

This is my painting for the year. Slow going at the start, but have found my speed and quality improving over the year so far. Glad to have finished all my starter box minis before new 40k is released!

This month my pledge took a wrong turn. Rather than finishing a coherent boxed set, I started picking up all kinds of other stuff. There’s a dwarf, a bunch of iron warriors marines, a stormcast…. I have no idea what went so wrong. It’s more like the cast of a warhammer themed ensemble comedy than anything. Oh and I bought one new model. By accident. One month I’ll get full points. It won’t be July though, there’s a certain release no one will want to miss out on there.

Anyway, halfway through the year! I’m pretty pleased so far!!

Was feeling a bit annoyed with myself that I didn’t finish my pledge this month (10 Skitarii, Datasmith and 2 Kastellan Robots), days I’ve wanted to paint have been too hot and I’ve been distracted a lot by computer games, but then I did as Warbringer suggested and got out everything I’d painted as part of the 12 month challenge and frankly it’s an absurd amount models that I’ve managed to get through in 6 months and I am really pleased with how much I am painting and the standard too. Only a couple of years back I’d have barely managed 1/4 of this.

It’s already the midway point. 9th edition has really got me excited, and it’s giving me the motivation to keep adding to my army. I can’t wait for the new box.

June turned out to be a bit of an orky month. Only 2 models completed but that wasn’t from lack of time at the hobby desk. I just am slow. All the guesswork around 9th encouraged me to tackle two hobby backlog projects where there was zero need for me to consider build options. Even though the aim was to have the Mek ‘clean and bright’and the buggy ‘down and dirty’, they both ended up pretty similar. I even did different methods for Ork flesh. The fact they look similar shows I can’t ditch my default mode for completing orks.

So far, so green. I’m at the half way point in the crazy year that is 2020. Given all that has happened, measuring the time passed in terms of painted models seems both trivial and reassuring. It also seems more rational than trying to think back to January.

The 12monthsofhobby challenge has been a real part of keeping me and my hobby life from tipping into chaos.

Hobby is a game of 2 halves and so what comes next. I do honestly have a lot of non Ork projects to do, but so far 2020 has been all about the waaaagh! I do want to get the final kans and dread completed so I can call the apocalypse box done. I also have marines and daemons waiting patiently. Howling griffons won’t paint themselves.

Not a huge shift from my last post, here is my last update for now on my Death Guard posting as I prepare to gear up for the new Necrons. Unfortunately the lights in my study and the boiler broke over the month so not as many models I would have hoped in total. But, my Death Guard force is notable now and I will chip away at it here and there.

I have already started on some Wraiths but wanted to take one last post for exclusively my Death Guard, 2 months from now I’m expecting to post a HUGE force of Necrons hopefully. I have a rather large backlog of models and with all these new toys to come I can only imagine just how large the army will get.

This month was fairly difficult for me. Had a lot of trouble with depressing and getting new medication as well as dealing with hayfever and not being able to do anything because of headaches. Glad I eventually finished these two lovely ladies though. They definitely tested me a little sometimes!

First time in a while that I completely finished my pledge, having finished two single models of my Death Guard and with a bit of struggle also my first

Part 1 with pictures :
June was very productive for me. And I ad loads of fun work on several stuff. I hope to continue this flow also in July and with build new cabinets with upper 60% display windows I’ll have enough room soon to display it all as well! Complemented with a half year picture including stuff I did in January before I joined this 12 month hobby journey

First time I managed to fulfill my pledge 🙂

Ok, I cut it down compared to last months. Only Reivers and two containers. But these Reivers had a long way behind them. Good to see them finished. Beside that I was finally able to start on the DeathGuard. The scheme is made after a Tutorial from Midwinter Minis and now I can’t wait to paint more of them 😀

I only pledged this month for the Iron Priest because I wasn’t sure what else I was going to paint. The Iron Priest was the last model for the Tale Of Warlords army I was making and I painted that to the best standard I could, focussing on each sub-assembly for a day before assembling it all.

Once that was done, a friend had sent a bunch of models, already assembled and primed, which is what I spent most of the rest on the month doing, those are everything from the collage except for the Dark Angel Intercessor which I did last as part of a long term project I’ve been working on to paint one model from each First Founding loyalist Space Marine Chapter, there’ll probably be more of those added in going forwards as I’ve only got three chapters done so far.

I’ve been pleased with most of what I’ve done this month, although in places the models being already assembled hasn’t helped get the level of precision I’d like and getting in to parts was really tough.

It’s been a quiet month for painting, haven’t done too much!

With the heat sapping energy and drying up the paint even on a wet pallette, this month feels like I achieved not much at all… But then I remember how many hours went into the Angry Orange Gal Lizard which was bought for a gift (only purchase) . I had real fun painting it up, using the colours suggested by people over on Twitter.. It became a matter of Pride…
There’s also the little things, like finishing off the Autocannon for the Contemptor, which now completes that model. Magnetised the Primaris Lieutenant so he has options.
Built 2 sets of pre-painted Plasma Conduits. And base painted what feels like a Gazillion Necromunda bases ready for final drybrush. Sub assembled some Clumsy Heart Sisters, and prepared another contemptor dread for sub assembly… So I did more than I thought..

Didn’t paint as much as I wanted this month again but still had a crack at it.

I only finished one mini this month: a buffy bugbear on which I really pushed my skills. I spent some time working in balancing the contrasts and lightnings in the mini as well as adding some tints here and there to give some character and life to the model. It looks promising for the next stuff I have in line.
Unfortunately the grey pile didn’t get all the attention I wished to give, at least not as much as I thought the forced stay at home would provide me. Who would have guessed home schooling two kids was easy?
I’ve added two nice big pictures: one for the finished stuff and the other for the ongoing projects.

So initially I had been hesitant to join in with this challenge fearing it would pull focus from my Warlords but I’ve decided now Warlords has wrapped up its time to jump in! It’s likely I’ll never be this productive as I have been in June. I’ve smashed through a Knight, Rusty 17 Ad Mech and then more stuff for my Sisters hitting a whopping 1667pts painted this month! 😁

But with 9th on the horizon I predict a lot more Sisters and Marines are getting painted in the coming months! 👍

After a quiet May, I just randomly began painting a Slaanesh warband of 1250pts for no good reason! The new chaos warriors were assembled, plus five seekers & 20 Daemonettes which had been base-coated for around a year suddenly got finished. Glad that I waited until the mood struck, rather than forcing myself to do them, as I really enjoyed it all.

I said last month how good the returns was and this month has been the same people have been really pushing their work. I’ve had more photographs and returns this month again! There is always time to join in!

I follow most people on twitter or with the discord channel but some of these paint jobs have blown me away!

The standout hobbyist this month for me has been JammerJun – The buffy bugbear is just fantastically painted and it is one of the best models I’ve seen painted on any format – Well done mate!

What has been your favourite?