Whether it wants to or not, our brain loves patterns. This can manifest in a multitude of ways, from organising things with labels for easier categorising to tidying up or at the extreme end, lining up our belongings with an neurotic need and accuracy.

In terms of our hobby, this can be both beneficial and as far as I’m concerned a right thorn i my side sometimes. Its helpful when i need to say, grab 10 cultists with auto guns from a collection of 40, where half have close combat weapons (more on that shortly). It can help me spot, at a glance, which of my 3 Carnifexes aren’t quite finished being painted. A bit like “spot the difference”, remember that when you were a kid, looking at two pictures with slight differences?

You probably remember how models used to and often still do look, in a fixed, single posed cast. Before models it was cardboard tokens on board games so not really a problem, these a there just as representation of the characters we imagine are there. We don’t expect them to look realistic or move, and in their uniform wrongness they are fine.

Then technology advances and we try to push the boundaries of whats possible. This is where holes appear i the patterns. I remember playing ASCII games as a kid, where the pictures and levels were made of computer characters and symbols. The graphics were so bad, that much like a book, most of the games were imagination. 20 years later playing Dead or Alive on the Play Station and the high poly models with realistic movements convey realistic impacts for more immersion. But that made the mistakes stand out more… They apparently put plenty of effort (possibly too much) into bouncy boobs, but couldn’t stop that same woman’s dress passing through her legs when she fell over

The first time I saw a pose-able mini and it blew my freaking mind. In was assembling skeletons, from Advanced Hero Quest I think. This one was defending, that one was thrusting, the one next to it was stabbing. Different combinations of shields, swords and spears made for practically infinite range of possible poses. Now Games workshop leads the way in the field of war gaming in terms of model range, variety and pose-ability/customisation. I think this is one of the reasons that i haven’t got into the minis of other popular war games. I know that the limited poses would get on my nerves. Weirdly this is not something the bothers me with board games. For example, Star Wars: Imperial Assault has a variety of decent quality minis with duplicates but because its a board game, I’m happy with the uniformity, like chess pieces.

Games Workshop isn’t though, while providing many great opportunities for variation in models with the same battlefield role, isn’t perfect. There are instances where they provide models that only fit together one way. Commonly the models in their starter boxes are like this for ease of putting together and playing sooner. Some of these models are then released later with pose-able kits. Sometimes there are models that only have one option, that fits together one way.

Two pairs of twins in the same squad? What are the chances if that! Amazing…

I just cant handle it. Especially on nice high detail minis. Ive already touched on fighting this duplicate menace before with my Lictors and Possessed. Here some other examples of ways I’ve tried to combat these strange clones…

Jokaero Weaponsmith – the one on the right is the original single pose mini. I straightened the back and lowered the arm of the other space monkey.

Tyrant Guard – The one on the left has very limited posing, so i made a more aggressive and dynamic, striking Guard. Since I got these fine-cast models the newer kits were released that contain 3 pose-able plastic Tyrant Guard. 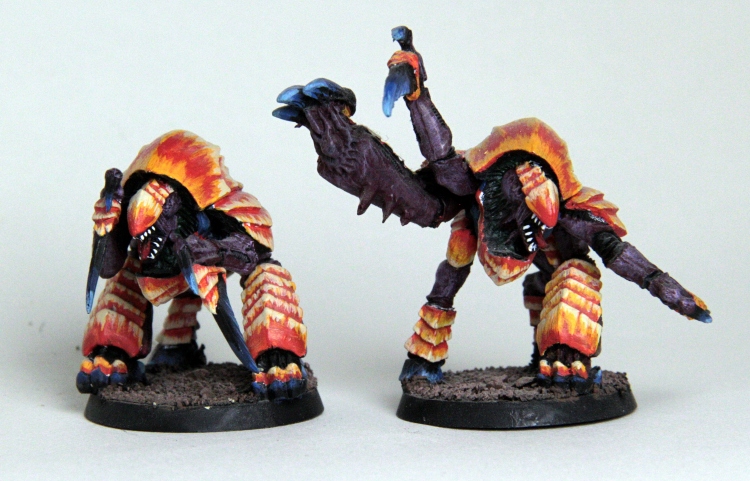 Ok… so the cultists were an Ebay purchase from the Dark Vengeance box set. One whole DV set and a separate bid for 20 cultists left me with a total of 40 cultists, each unit of ten having a champion, heavy weapon and 8 cultists. Until that time my only Troop choice were Rubric Marines… Which meant very small armies, no fodder and difficulty filling force organisation charts.

I thought this was a great idea… Then i saw the models. Even though half of the basic cultists have auto guns and half have close combat weapons. I realised, each 10 man unit consisted of 4 identical twins. With two sets… I had 9 sets of identical quadruplets and thats not even including the two pairs of twin champions.

I had my work cut out for me. I figured my cultists would be recruited from all over the place and taking clothing from wherever on their travels, so one way to vary them would be by their random clothing colours. I wasn’t happy with that alone though, those exact same poses would annoy me. So i built one of each model normally… Then did some very rough kit bash conversions on the rest. Swapping heads, legs, weapons and all sorts. I think only one model has a piece not from the kit.

Ive tried to group all the quadruplets as best i could for easy comparison, then the two pairs of twin champions together in the last picture.

After taking the photos i can see that i didn’t really try very hard to paint them so i may give them a going over using their existing colour as a base.

Anyway, let me know what you think, do they look different enough? Was it worth it? Does this sort of thing bother you or do you prefer the endless sea of identical poses? Have you tried to fight the close wars with your own light conversions? Do you remember the first models you were able to customise? Let me know!