If wolf lords could be afraid then Erik Morkai is the Wolf Lord they would fear. Erik Morkai is the scary one. Scary Wolf (Erik), baby (Ragnar), ginger (Krom), sporty (Sven) and posh (Egil – have you seen his collection of automobiles?). He favours Wolf Scouts, stealth tactics and viciousness in combat. 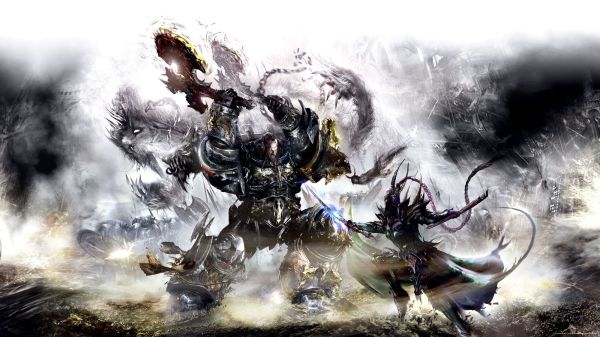 There is artwork for this Wolf Lord and a short story. Here he is battling Dark Eldar. This picture is what I based my Erik on. The dead Dark Eldar on the base too.

Adrian Walter’s Erik Morkai was again useful for this conversion. Adrian had gone to incredible lengths to make his Erik. It made me realise that if he could do that then I could probably make the Erik I wanted to make. Adrian had made both of the axes for his Erik. One from plasticard (!) and one by taking a space wolf axe, cutting the sharp edge down and putting teeth from chainswords to make a chain axe. You can make chain axes! This blew my mind. At this point there were no Space Wolf chainaxes (forgeworld has since released some). You would have to get Berserker ones and cut the little triangles off. As so many chainaxes are in the art work and the fluff being able to make wolfy ones is amazing.

I made mine from two Wulfen axes using this method. I cut the handles down as they are two handed axes. I don’t know what I was thinking in the original mock ups with the full sized handles, it looked mental. 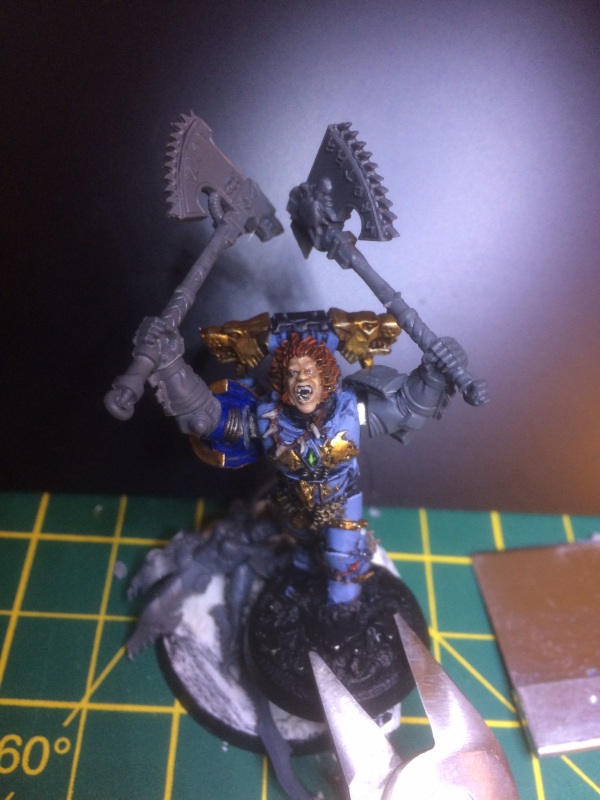 I’ve used the body from the Wolf Guard battle leader that donated his arms for the Egil Ironwolf conversion. It has great detail, the double headed wolf on the chest was perfect. It also isn’t using Krom’s body again. Although by not using Krom I had thin wrist issues. So the wrists are from spare custodian arms. They have the Aquila on the back and look suitably vicious with the straps on the inside. If you look closely at the artwork Erik has a winged wolf skull on his wrist. The Aquila was close enough for me.

The artwork gave me a good look at his face. He’s got a scar down his face (scary) and a rather unique beard and haircut. He’s sort of got a slicked back Mohawk and slicked beard (for stealth – never mind all the chains and chain axes making a hell of a noise). I’d already used a Sternguard head for Ragnar so had a look through my spares. Sure enough there was a snarling, scar faced, warhawked absolutely badass head right there. So I just green stuffed braided beard and two rat tails coming down from the back. A small amount of scoring and green stuffing the hair on top gave the impression it was slicked back rather than cut short.

Again looking at the art work there are a load of chains flying around. So I put some chains on the Axes and used chain to attach wolf pelt to the shoulder pad. He has a Wolf pelt cloak too. I took a regular one from the Wolf Pack kit and basically cut out where the back pack would be. I just kept cutting it until it was a very snug fit, I also had to bend it where it would meet the foot, the beauty of plastic. The fact he has a pelt cloak and not a fabric cloak fits with his savage look.

In the short story he also has a plasma pistol, so I put one on his waist. He also has two chainaxes that can be put together to make one double headed axe…I must have forgot that detail when I made him…;-). 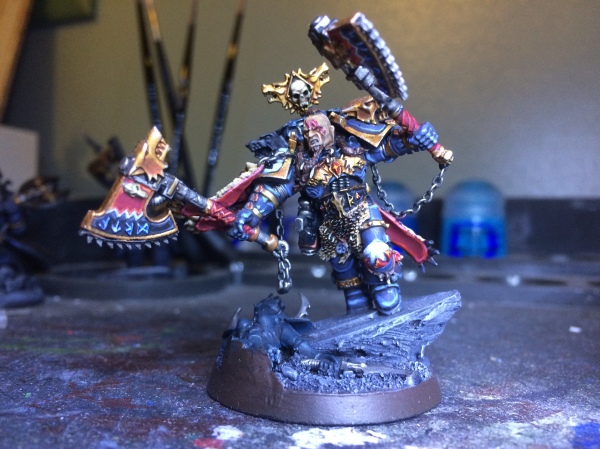 So that’s my Erik Morkai. I based him on the picture and as I tried stuff and tweaked him he gradually looked more and more like Angron. The chain axes, the pose, the wrists, even the slicked back hair. Like Erik’s character Angron is (very) vicious and scary so I don’t really see it as a problem.