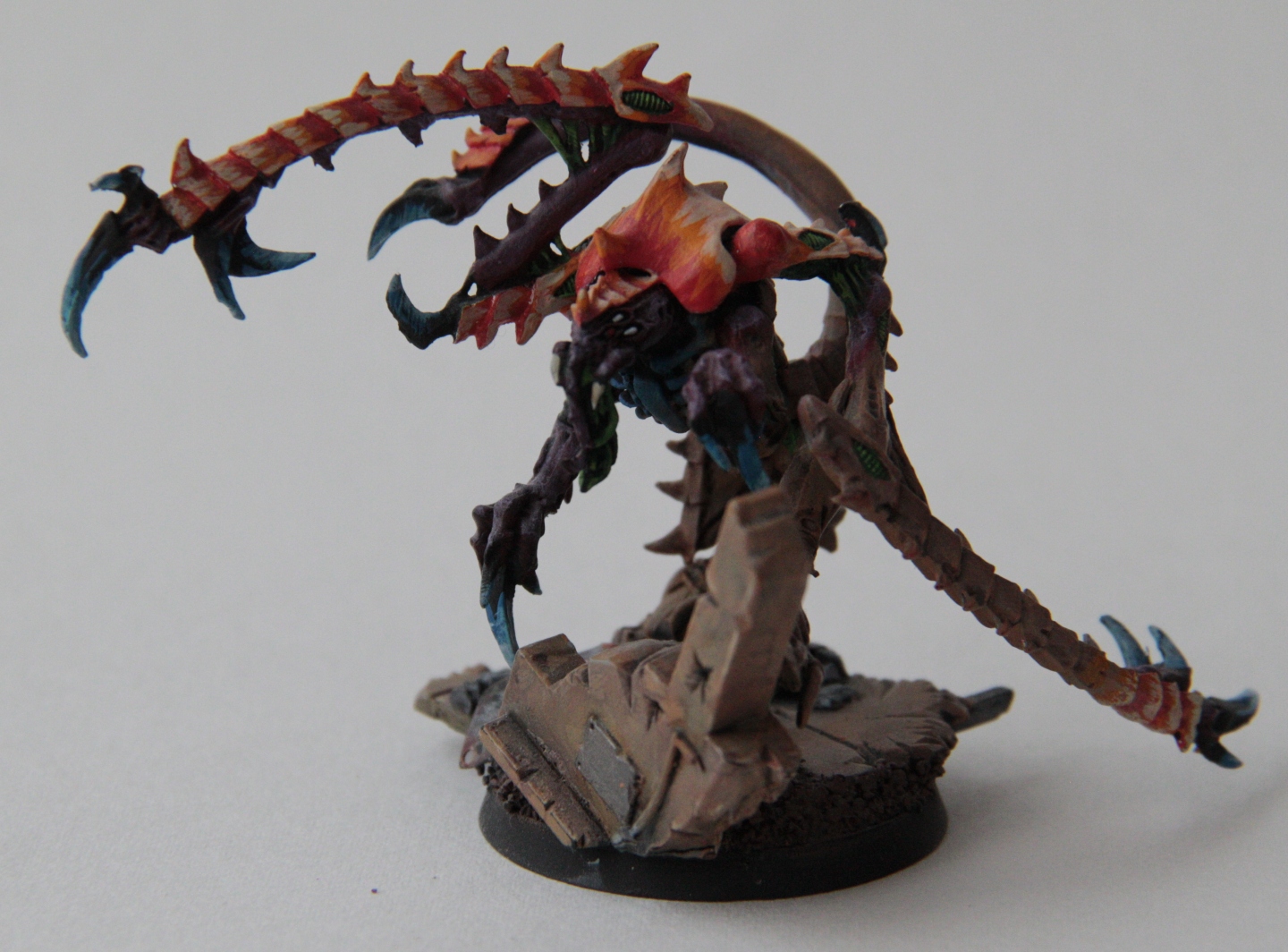 Lictors at the party disrupt the whole scene…

So… Space Wolves are known for many things. Being really good at killing, drinking booze that would kill a man, telling reaaaaally long stories that are probably very interesting if you have long hair, sharp teeth and wear pretty fur coats. 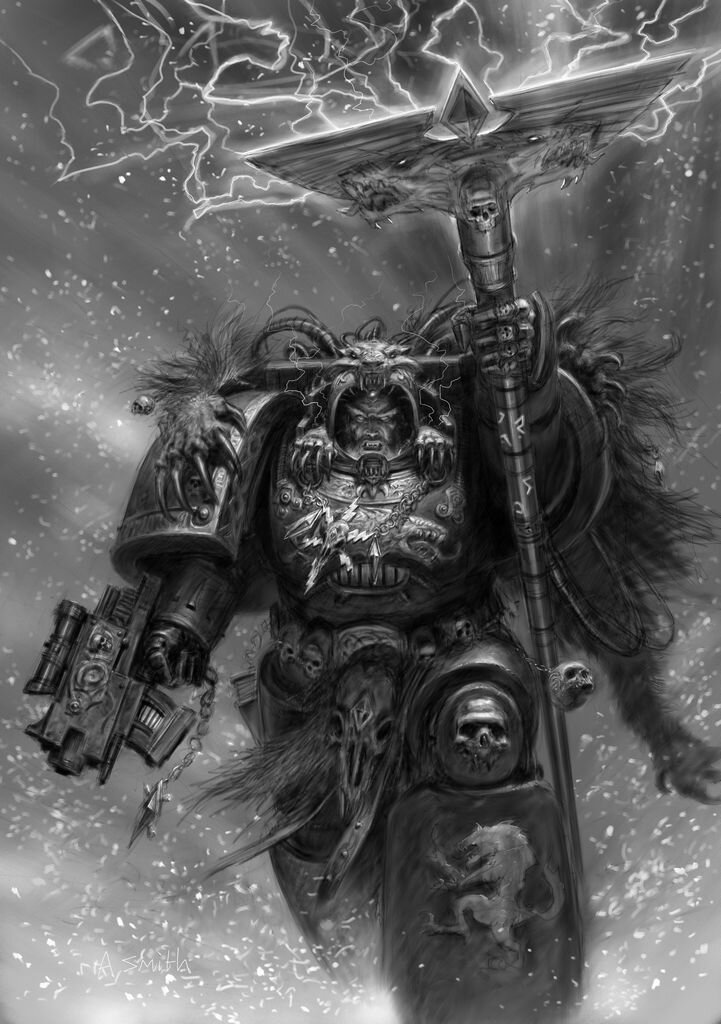 “tell me the ones with the wolves again!”

You know what they are not famous for? Cleanliness. During their shinanigens, while swinging fifteen variations of chainsaw edged sticks around their heads, chanting “Wolfy Fang! Runes and Wolves, Frost and Wolfing Aaaaaxes!”… They leave behind their fair share of debris. Like Wolverine in the child friendly x-men cartoon of the 90’s, snikting his way through everything that doesnt bleed, in their wake is just a load of twisted metal garbage (…and hunts for the hunt god and kills for the kill throne, whatever).

My point is… What was my point? Ah yes!… Nooks. Its all about the nooks and the crannies, and their adamantium toothed chain spoons leave their fair share of hidey places… And hidey places means the Boogey Man. Which seemlessly segways this article to this guy… 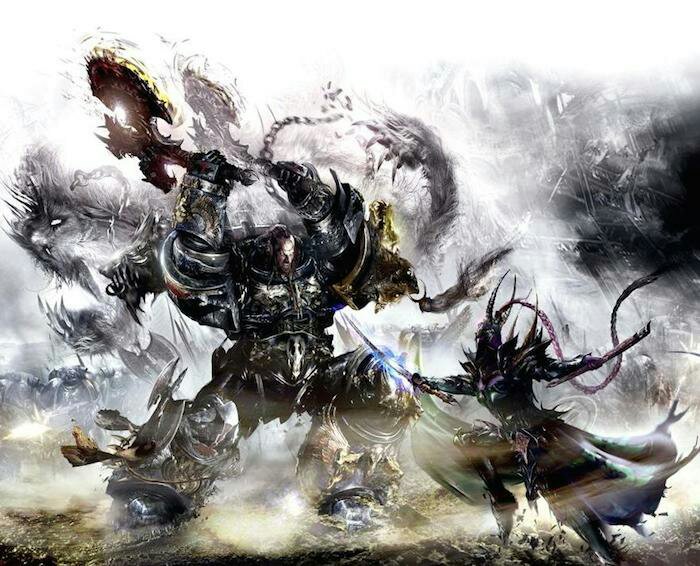 No wait… This one has his own article. I mean, THIS guy…. 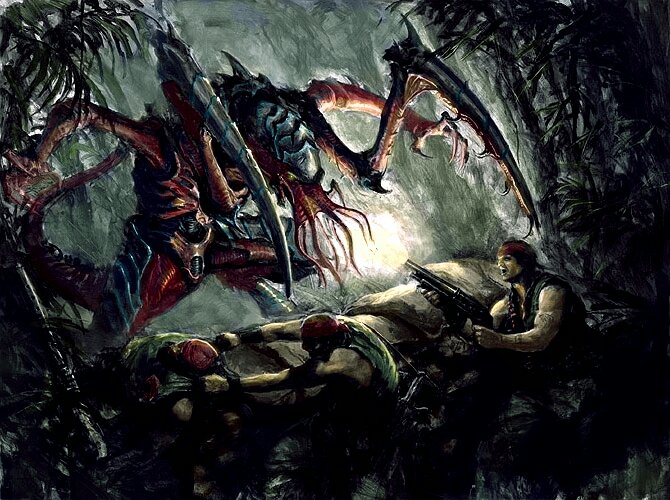 “But i thought this was a spacewolf article man?”… Not any more, Erik left his rubbish lying around and Ragnar left the door open… and THAT, is how you get ants. I mean Tyranants.

Ive been invited onto the blog to begin branching out into what ever plastic, resin or metal nonesense i have knocking about. This way we can have more variation… But mostly we just dont have enough cool stuff in one army.

Ive started with one of my lictors, not because of the super badass intro ive spent weeks researching and paying other people to write, but because it was so fun to do, is probably one of my favourite models and one of the more potentially challenging.

For those of you not familiar with Tyranids, they are 40k’s big, GM, stabby, space locusts. You know to fear them because you know how peoole feel about genertically momodified wheat these days, never mind these slice ’em, dice ’em bugs. They function as a single vast organism controlled by The Hive Mind. Each individual organism has a role, and the Lictor’s is to stab importent people faster than they can say “i never used to have a sentient wall with six foot insect swords cutting me up… Did i?”. Their thing being big, sharp and camoflaged.

First i better throw you in the deep end of the colour spectrum though and show you my first, metal lictor. It has the colours of the rest of my hive fleet with no camoflage. You better put on some shades because things are about to get intense. 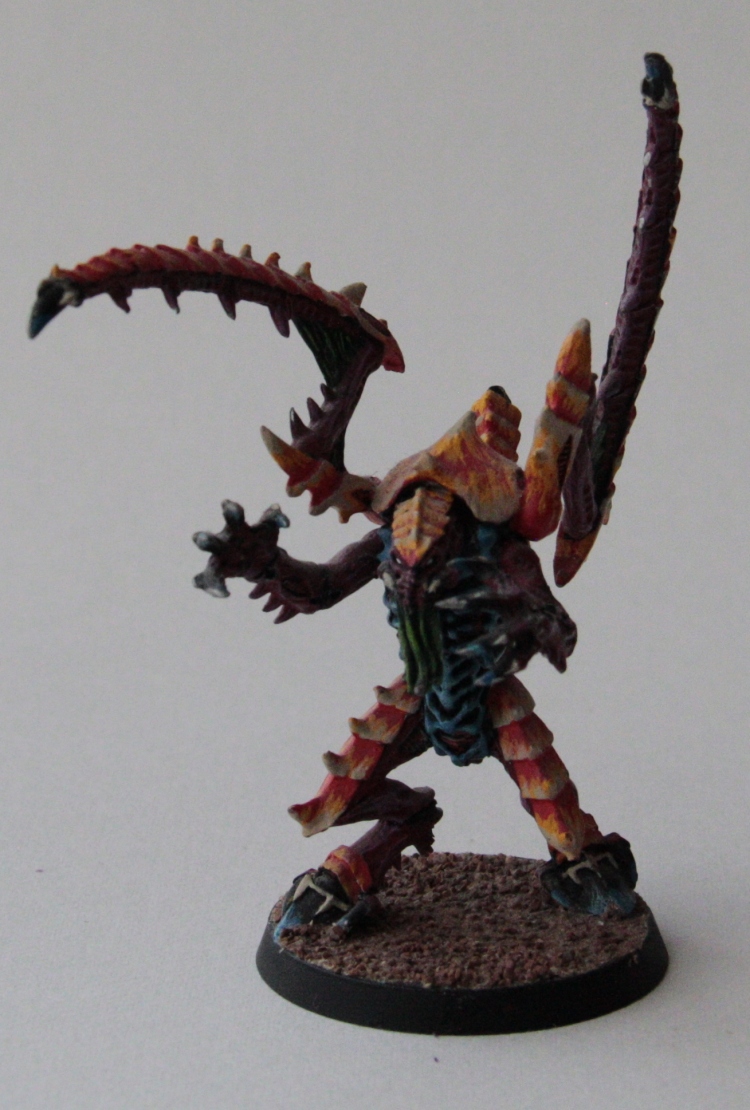 Ok, so it looks like your about to get snipped up and eaten by the 80’s but its my colour scheme and i stand by it. Its been refine from the even more insane choices i made on my very first models, ans when the whole army is together i think it looks pretty good. This Lictor is one of the older metal ones.

I remember when they started phasing out the metal models and i felt like i was missing out. The models have never been cheap but you felt like you were getting something for your hard earned cash with those things. Then when i got my first resin model, which im pretty sure was a lictor… Oh the joy! If i wanted to convert this thing, i could cut it with a knife or bend it over a boiling kettle. I also didnt have to pin it if i didmt want to, since the glue was of similar mass to the model. You knew when you dropped on of those metal ones, it was like a pineapple grenade, shards off in all directions. Pinning them was a pain, im pretty sure one of my metal lictors shoulders is pinned with a snapped drill bit.

The change in material is what insoired me to try some more elaborate conversion. I hate seeing a load of detailed models in the same pose. Since your brain is very good at recognising patterns, having 3 lictors in basically the same ahape makes them look like sychronised backing dancers. To decide what position to put them in, i didnt really want to use any od the artwork. These are meant to be very sneaking, stalking monsters but the original pose is similar to the existing art already… And it conveys less “stealthy hunter” and more “SURPRISE” as it pops out of a birthday cake. So here is my first take… 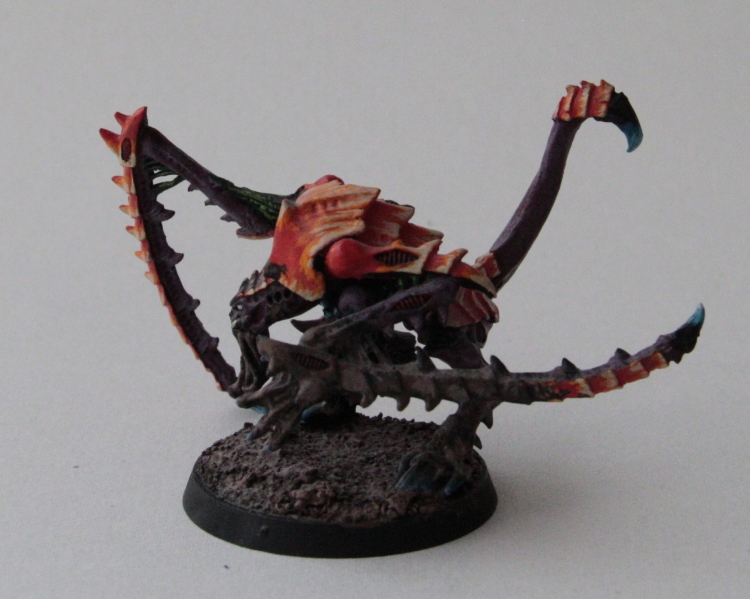 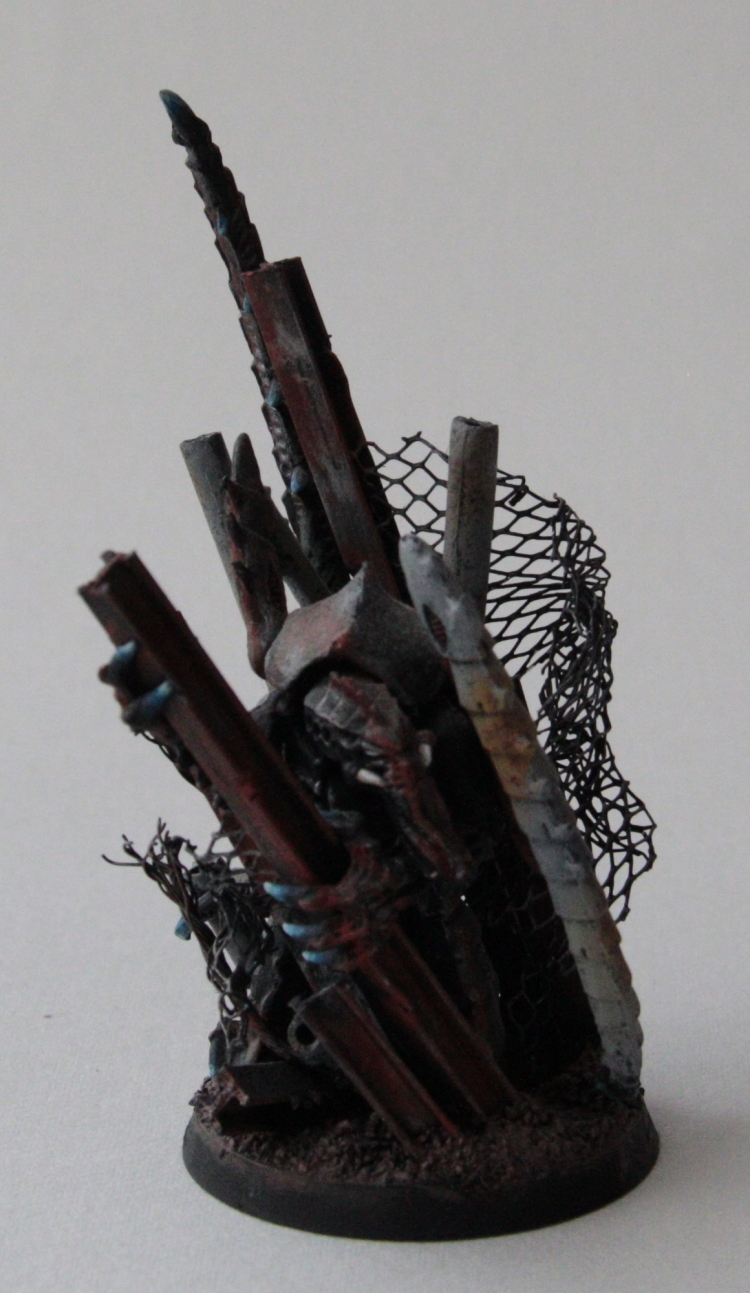 I tried to give it a lower profile and look more like it was stalking. Also i tried to incorporate its camoflage ability in the paint work. I matched the areas closer to the base in colour. And while it is sort of camoflaged, it also looks a bit like he just got muddy. 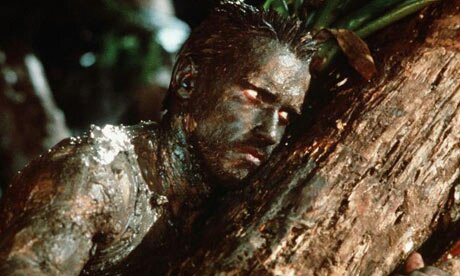 What ever works though right?

For my next effort i decided to throw caution to the wind and go wild. I wanted a lictor that was actually hard to see. So i came up with this guy, one of my favourite models to date… 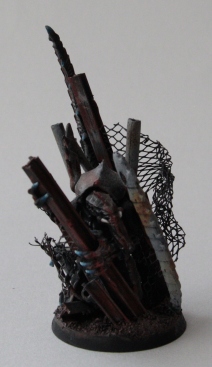 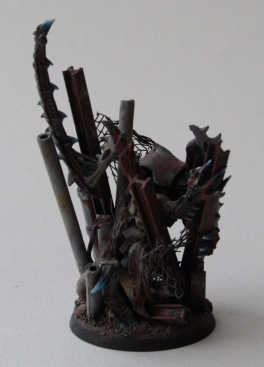 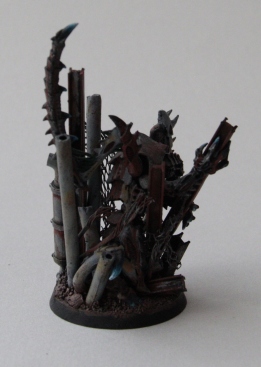 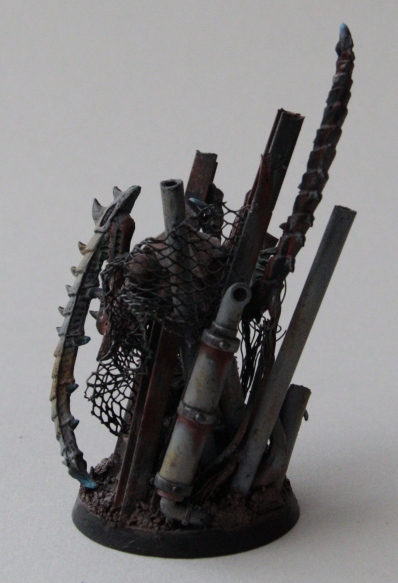 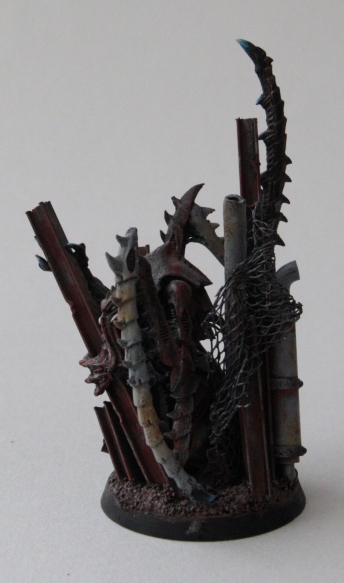 I was really happy with the result and it was fun to do. Its even easy to lose it in the industrial scenery! I used I-beam girders i got at the local generic model shop (they do a load of various cross sectioned plastic lengths. A spare exhaust that came off a baneblade kit or something. The other pipes were made out of the resin spru the lictor came off. Then there’s some classic “chain link fence” wireform mesh and finally a bit of break cable from a bike. I painted the scrap first, then from a few different angles i tried to overlap the colours over the Lictor.

I was pretty pleased with the end result. I did get a Deathleaper (Super Lictor) later but decided not to go as crazy, so i could actually see the model. 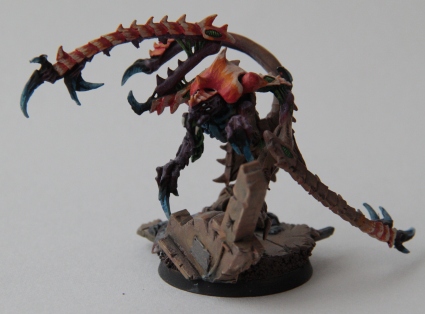 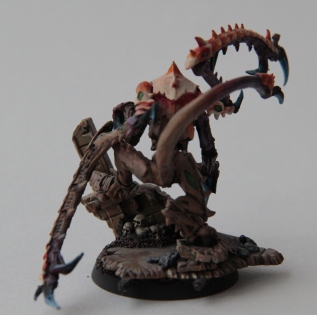 This guy is basically the normal kit with bits an older corner piece bit of scenery, a peace of metal from he stamped brass GW does and a small pile of skulls from a GW basing kit i think. 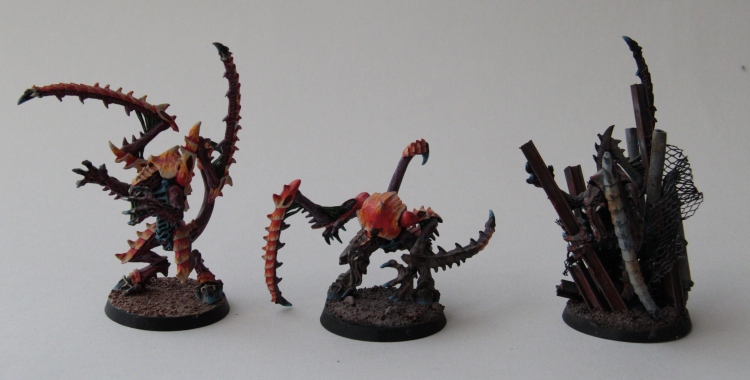 So there you have it, my attempts at making models a little less uniform and painting a camouflaging alien. I hope you enjoyed this and that it might help or inspire you in the future. If you have any ideas of your own that could help or inspire us, please post a comment or send an e-mail!