I Bit Off More Khorne Than I Could Chew.

The article’s project is an exercise in effort vs reward. This Herald of Khorne i made belongs to a friend and is a result of me underestimating a task’s difficulty.

I have a friend with a VERY large Khorne army, consisting of Chaos Marines, Daemons and plenty of Forge world models. Much like me though he seems to dislike waste and parting with things he’s purchased. This includes models he has had since we collected Warhammer Fantasy almost twenty five years ago.

Part of his largest army are his Bloodletters, of which he has two units. A unit of the more dynamic modern Bloodletters and a unit of the more dorky metal Bloodletters that are decades old. Even when he uses Bloodletters in a list he rarely fields the old ones that he was happy to kill my Skaven with, because he has been spoiled by the quality of the new ones. He wont get rid of them though, possibly because he doesnt want them to be a waste of money, more likely i suspect because he cant be bothered to ebay them.

As i mentioned, i despise waste… I would rather use them, sell them or recycle them for parts. So… I suggested he modernise them. I probably then said something stupid along the lines of “All you have to do is…”.

No problem, i got this…

This conversion is like the worst way to represent that statement i can think of. In an effort to make him feel like it was do-able, i decided to do the first one and iron out the kinks in the process before describing it to him. Instead it was me, essensially sculpting out of metal. If you look at these old models, what you find is that Its a small lump of metal with a head, two feet and sword. 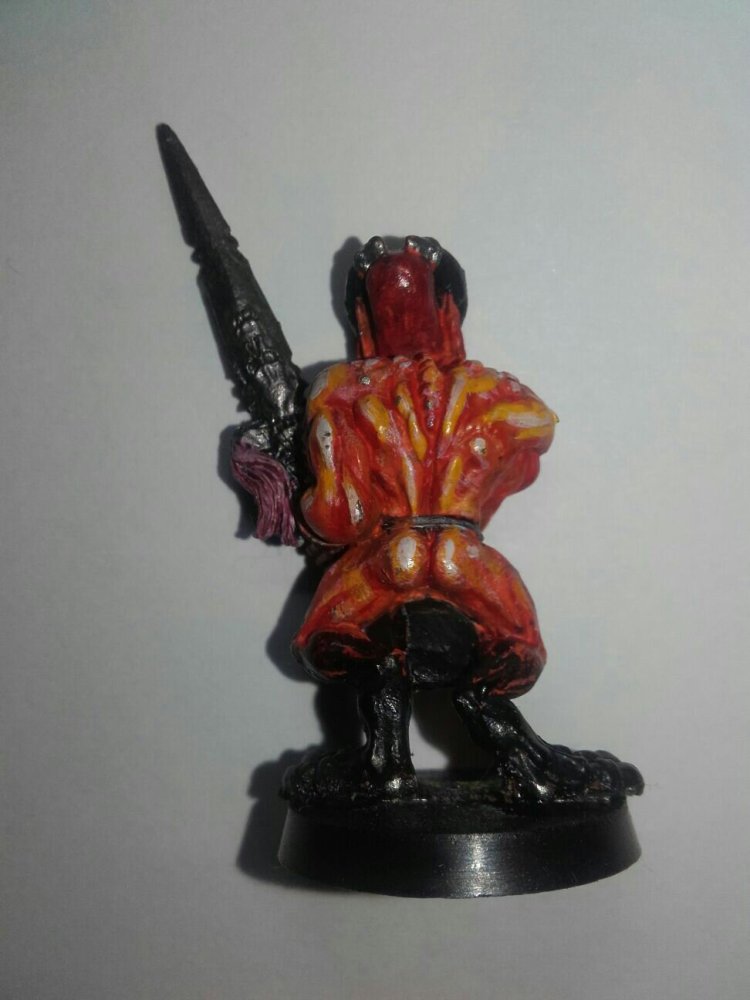 My plan was to seperate the arms from the body to create a slightly more natural pose than the one where the daemon is trying to have a little cuddle with his sword. So i had to cut off the the head to have access to the arms (your welcome Khorne). I had to cut between the arms and the body to create space, but to do that i also had to cut the shoulders… Elbows and wrists. Then i had to file back all the bits that were on the inside, pin all the joints back together then greenstuff all the gaps and areas lacking texture.

By the time i was done, it looked better… But also weird, he was slightly more broad and the open posture took up more space.. not to mention after reattaching his head he actually had a neck now… So now he looked way top heavy. If i elongated his legs though, make them thicker… That would help with his dimensions. So i cut off his feet, chop here and there…

By this point… no, well before this point, i had obviously noticed this was an insane undertaking for all of the other Bloodletters. I didnt want to do it again, he certainly wouldnt. Never waste an opportunity though… He was bigger than all the others now, he could easily be a champion… Or… A HERALD! I gave him cloven hooves to replace the feet, lengthened his horns, some licks of flame on his sword, and gave him a belt of trophies. Finally i plopped him on a larger base.

By the time i had finished, i had cut and reposed almost every major joint, made a neck, and new feet. im reasonably sure i could have sculpted one from scratch, to a similar quality with less effort. Im told that he hasnt finished painting it so ill get some new photos up when he does.

I wish i could have said it was fun… But it was probably too much work. It was kinda rewarding though and a lesson in humility. I am only mortal, and was almost defeated by this inert lump of white lead.