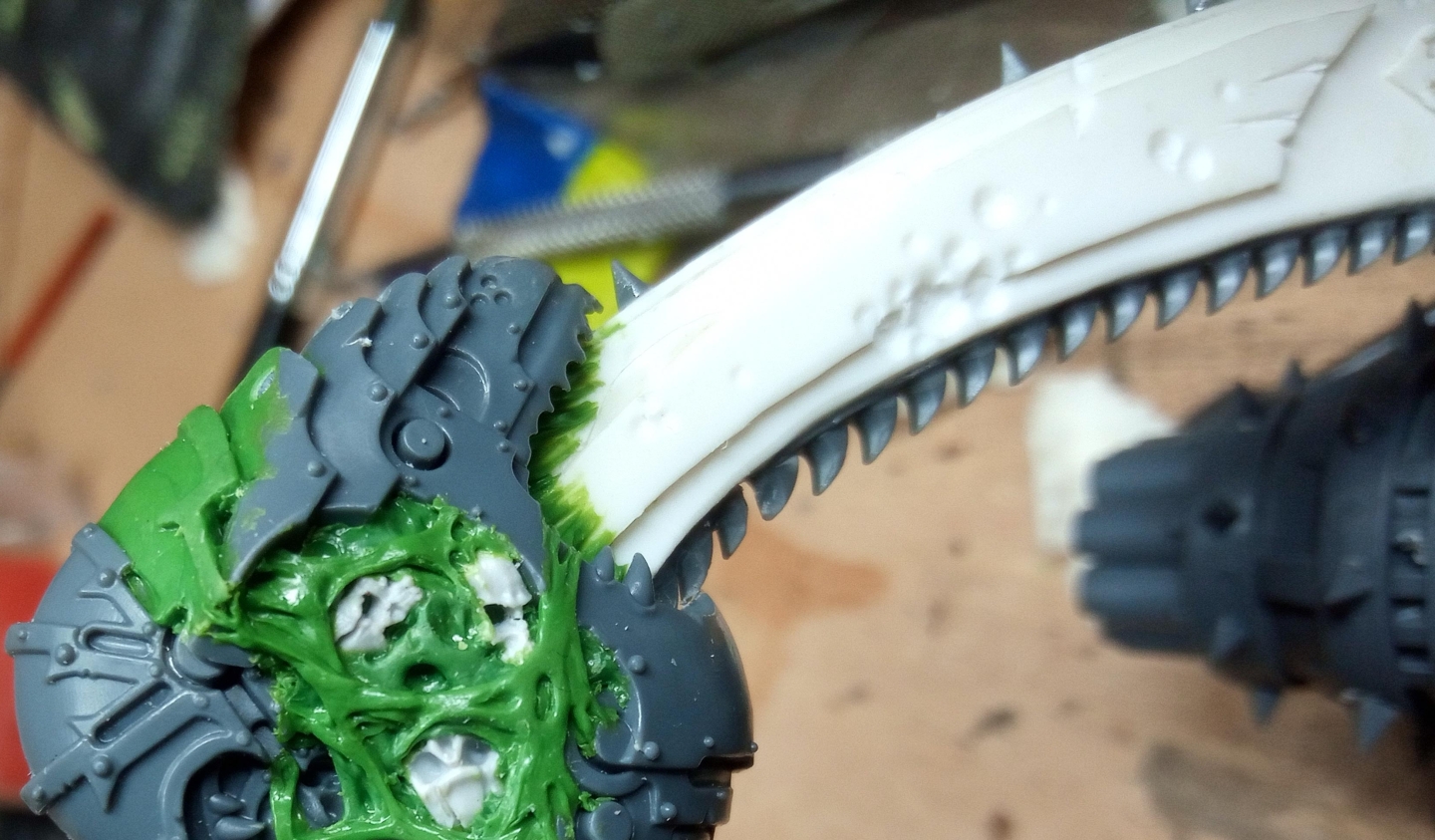 This post is about the Melee Weapon arm of the Nurgle Knight I made for a friend. If you haven’t seen the original post you can check that out here.

The Scythe of the knight was the catalyst for this project, so I wanted it to be something pretty cool. I had an approximate concept for a pose and size of the scythe, not to mention that Mortarion already has one. Although that poses some problems of its own… I don’t exactly want to copy it, but should I use some of its aesthetic for reference?

So I sort of used its profile for reference, but changed the design in a significant enough way to make them different, I would reverse the positions of the chain and blade… making a big Chain Scythe.

To make the blade, I drew the shape I wanted to blade to be on some 2mm plasticard. even thought its pretty substantial, to fit a the teeth on there I new it would need to be thicker so after cutting it out I made a copy, glued the together and then once glued I filed/sanded/scraped the edges so that it was even all round. I already knew that for the part holding the blade I wanted to use the front of the Skull Cannon, a kit I significantly made use of for the Khornate Knight. So when I made the blade I made sure that the base of it was narrow enough to fit through the mouth. The other tricky part was to remove the chain teeth from the knights reaper chainsword and transfer them over to the scythe blade. (I’ve since discovered while looking for other parts that Zinge Industries do teeth for chain weapons

Next I started working on the haft which I made from the reversed body of one of the guns, part of the rapid fire battle cannon and part of the skull cannon barrel, that fit in quite nicely with the other part of the same kit. I also added the bevel on the front axe like, blade edge of the Scythe.

Once I did this structural bit, I really had to mesh all the components together, make them seem like they were meant to belong. So I started green stuffing up gaps with textures that matched adjacent areas. The side of the blade was obviously quite bland being unmarred plasticard so I added some more plasticard decoration, battle damage/corrosion and some green stuff to that.

It still looked a bit like a hatchet thought with all of the weapon at one end of the “grip”, so I used most more of the rapid fire battle cannon as well as the axe haft from the lord of skulls to give it a bit more length and I was much happier with this look. I was also hilariously monstrous, even compared to the size of the knight, but I loved how lop sided it made the knight when i offered the piece up, I could already see it shambling.

Now for an important bit, attaching the arm. I had originally planned to attach it normally, but not only would this no allow for sufficient range of motion, it wasnt long enough. This posed a new challenge, I needed to be able to suspend the arm in just the right place away from the body while I fixed it. so I drill 3 holes in the body of the knight and 3 in the arm, glued paperclips into the arm and then put bends in them before threading them into the little holes I’d drilled into the body. Now I just had to adjust the wires like legs on a tripod to get the angle the way I wanted it, once it was in the right place I glued the wires into the holes and let it set. There was obviously still some give in the wires after this and I didn’t want to accidentally bend them out of shape while working on it, so using plastic glue I attached plastic struts to it to make it a lot more ridged.

I had no idea really how I wanted the arm to look from this point, I had used a heat gun to twist the arm socket a bit before fixing it, as if the stresses on of what ever was moving it was buckling the metal. The body had lots of organic fatty lumps on it and it would make sense for it to look strong enough to wield the scythe. So I started using Milliput to create muscle strands, mostly to help bulk it, with the assumption that I would end up green stuffing over it it skin once I had the volumes in place. While I was doing it though I quite liked the aesthetic so I just ran with it, adding more layers of muscle, sinuous tissue, and tendons instead of pistons.

I then started to layer up some details around the shoulder to get it to blend with the rest of the Knight a bit. Sculpting flesh onto the surface and then blending it in with the fatty bits surrounding it, adding damaged Shoulder guard (enough to tie the arm to the body but not so much as to obscure everything I had done). I also at this point had got some wires from Zinge industries, they were recommended to me by Rictus of Recalcitrant Daze. They make among other things, wrapped wire, which looks just like guitar strings but is considerably easier to manipulate. I also felt like the back of the handle haft was missing something, I didnt like that it ended flat, and when I was given some Nurgley bits by someone I found some bells on chains, which when added give a bit of a sense of movement which I liked.

Near the end of the project I noticed that at the front of the knight were there would normally be a weapon and heraldry shield, there was only space for one after the alterations I made. I didn’t want to lose an item that had a functions… but at the same time I like the shield that comes with the Chaos Knight kit. So i asked about to find out what people thought of the Nurgle texture on the side of the gun and if I should swap it for the shield… enough people came back with “why not both?” that I just moved the texture over onto the featureless part of the shield. I had to cut the back of the shield away to get it to fit snugly enough for it to look like it belonged as well as make some alterations to the part of the shield that looked like they were defying gravity in their new position. I also started filling in more areas like underneath the pauldron, and in areas where the muscle met the body to have a nicer transition.

…and that was pretty much that. this isn’t a FINAL, final photo but its close. If you want to see some more photos of the Knight as well as a spin around video of the lad then check out the original post here.

I hope you found this post interesting or useful!