With the Beast of Nurgle finished I’ve now completed my 16 players for my Kitbash Nurgle Blood Bowl team. I’ve been on the look out for potential parts to make a Beast of Nurgle for a while. In the meantime GW has released an official model now called a Rotspawn.

The Rotspawn fits with the team they released but I wanted a model to fit in with the team I had made. Plus I’d converted the rest of the team so why stop there.

I’d considered the Beast of Nurgle model from AoS/40k to use as a base, but like the Rotspawn it is a challenge to make what is essentially a slug look like they are playing Blood Bowl.

This is where the Gellerpox Writher from the Rogue Trader Kill Team game caught my eye.

He’s unarmed (open hands are like gold dust for BB conversions), in a running pose, has a tentacle, foul appearance and looks like he has regeneration. He fits the bill so, so, well. He’s not a slug type like a Beast of Nurgle but as a ‘counts as’ is spot on to the rules he has in the game. Basically a Nurlged up Ogre with a tentacle. There really isn’t even any 40k undoing to do. He really has no 40k parts on him at all. The model is covered in sea references, which actually could be ok to use ‘as is’ given that Nurgle Blood Bowl teams travel by plague ship. A quick google told me I was by no means the first to have this idea. Wudagast from Convert or Die talks about using the Writher as a Rotspawn in his review of the Rogue Trader game. So with the words ‘convert or die’ in mind, I had to convert the Writher into a Blood Bowl Player. 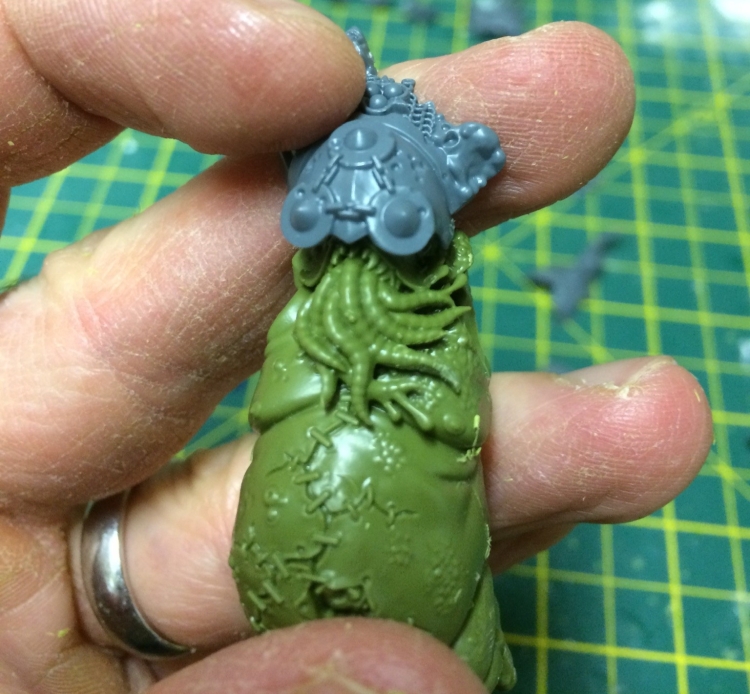 Armour is what I thought would make this guy a better Blod Bowl player and fit in with my existing team. I found a Blight King torso would make a good helmet if it was upside down. It has a mark of Nurgle, I could drill out eye holes and put a single horn on the top (Nurgle style). The eyes would then match my Pestigor and FW had just released a Minotaur with the same eyes too, so I felt I was on the right lines.

The shoulder pad with a large blade added, are both from the Maggoth Lord kit. The eyes on the other shoulder were ripe for adding horns to (adding horns is becoming my ‘go to’ for Nurgle models now). I switched the thin horn I’d put on the helmet to the shoulder and put a thicker one in it’s place. The blade on one side and horn on the other gave the model a pleasing choatic symmetry. 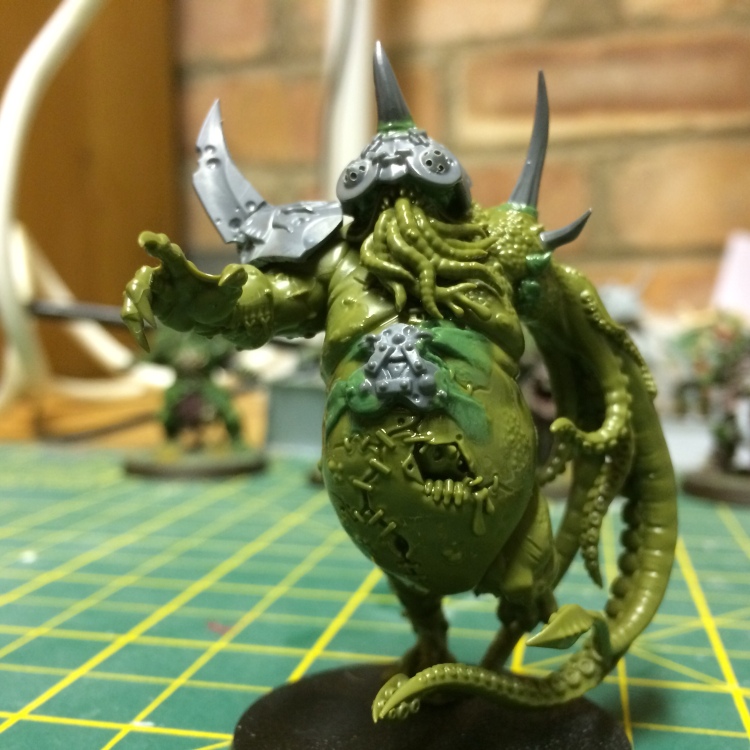 The belly armour is Blight Kings, trimmed right down (slightly too much, butter fingers). I’d been considering whether to keep the man trapped inside. In the end I decided it would fit with his role in Blood Bowl as a trapping monster. I wanted to keep the stitches too, he basically looks like he’s stitched up like a Blood Bowl ball. So the armour then acts as a sort of giant staple to help keep him altogether. Green stuff repairs and stretched skin were necessary for this piece to work. 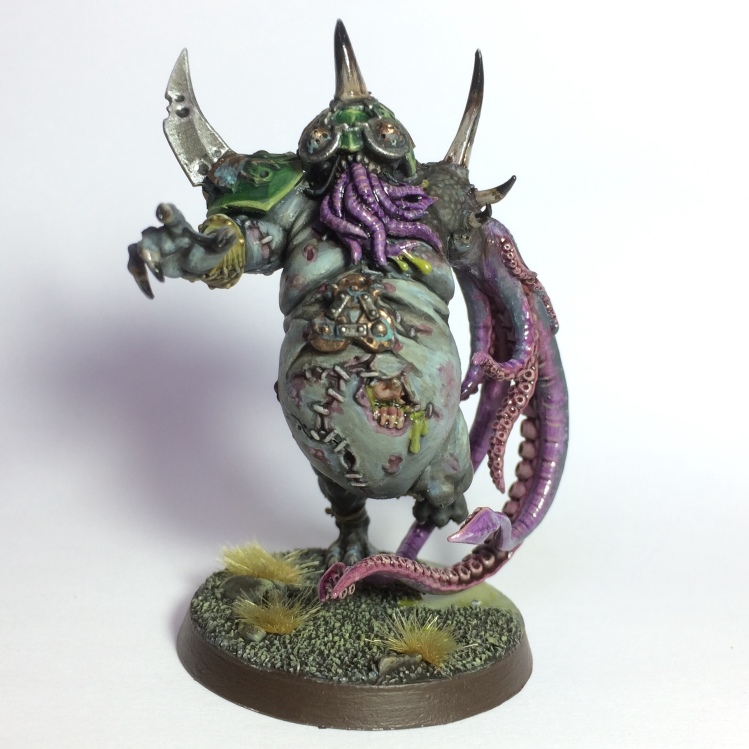 Here he is painted up. I tried to match the rest of the team. The Rotters, Nurgle Warriors and the Beast/Rotspawn and like scaled up versions of each other.

This picture is to show how pleased I was with the Writher’s existing pose, as I’d basically been making poses like this to represent my BB players!

So that’s the team complete with 16 players. I’ve got some hangers on planned but I’ll have to see if I do those straight away or get too excited by the next thing.

The Nurgle Warrior now has a greenish tongue/tentacle in response to a good suggestion in the comments (thanks Krautscientist).