There I am minding my own business when Warbringer (my fellow author here) shows me the Inquisitor Martyr Cinematic Trailer. “What a cool conversion that would be” he says innocently enough. Right that’s that then, I decided on the spot I was making that Helbrute! I immediately re-watched it and tried to figure out what I was going to do. I’d at least need a Helbrute model…

The trailer is on Youtube if you haven’t seen it yet:

The Helbrute appears about 1:30 into it. I also got some photos off my telly to help me make the model.

He has features from both the boxed Helbrute and the Dark Vengeance one. So I had to pick my starting point. The main deciding factor was probably the Scourge close combat weapon, I wasn’t converting that!

Although I really liked the design he has a couple of odd (for Nurgle) features. He is ripped like the DV Helbrute. Luckily I had a spare Daemon Prince torso for that (as the boxed one has wires for a stomach). He also has quite a chiselled face for some reason. I picked a head from the easy to build Deathguard that was similar but had a bit of wattle around the neck area, slightly more Nurgley.

The DV Helbrute has better teeth framing the head and horns. So I had my work cut out for me doing these on the boxed helbrute. It was green stuffing time. 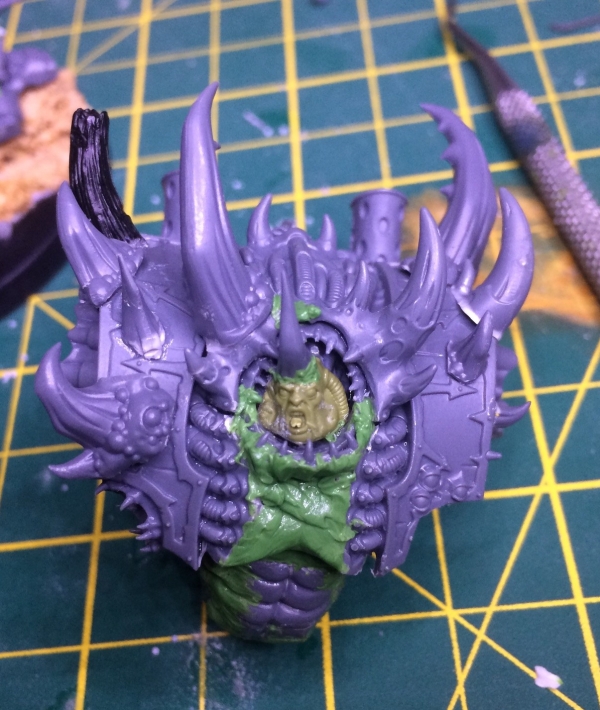 He needed a load of horns, I had lots of spares from a Maggoth Lord kit. He also needed a giant chaingun with loads of ammo hanging down! The chaingun I made from two Space Crusade (my bits box is ancient) Dreadnought Chainguns stuck together. The barrel end features are all made from plasticard pipes and two thicknesses of sheet.

While trying to figure out a weapon to go on the bottom of the Chaingun. Aiming for a Bayonet type weapon. Warbinger suggests turning the Lord of Contagion axe around to be a bayonet shape, I’d sent him a pic with it as an axe.

I really couldn’t find an ammo feed big enough in the GW line. I didn’t fancy doing a convincing job making one up at this scale either. So Zinge Industries was the answer. The feed is a bit like rubber but with a fantastically practical wire running through the length of it. I really fit nicely but it was also just hanging down far too long. Then I decided Nurglings should be carrying it. The one of the left is actually upside down (he’s normally doing a handstand). 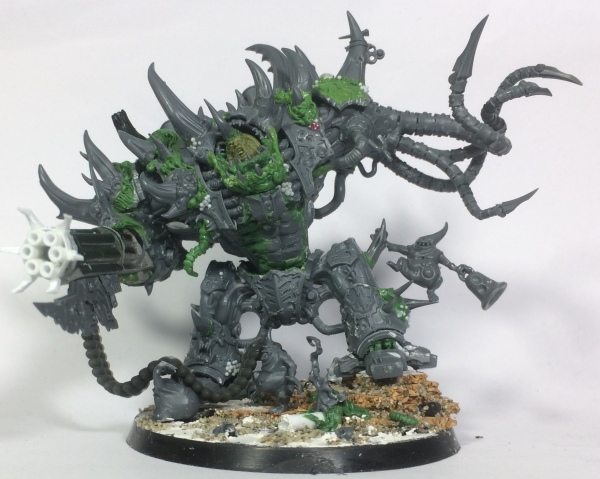 The painting side started off looking like Radiation but deviated quite a lot as I went along. 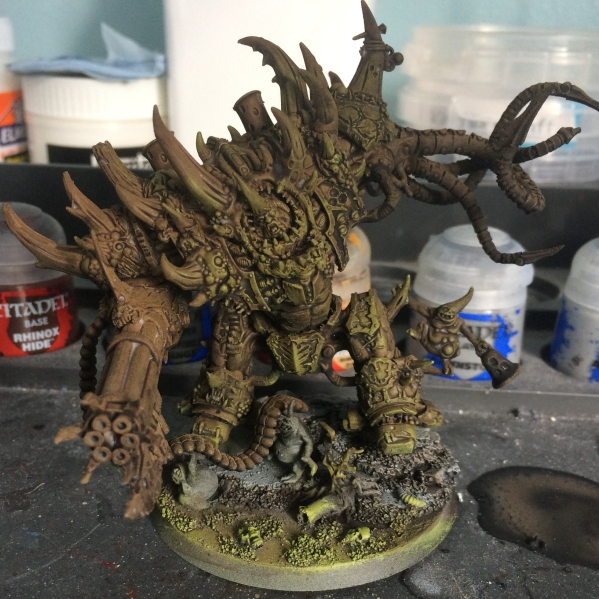 Tried out some burnt muzzle effect.

Fot the base I tried my hand at water effects. I’d not done it before and refused very good advice to practice first.

Above is water effects with Flourescent yellow paint dropped in. Cool isn’t it? Unfortunately it doesn’t stay like that and keeps dispersing. I took this photo, removed the liquid and thought about how I could recreate it. 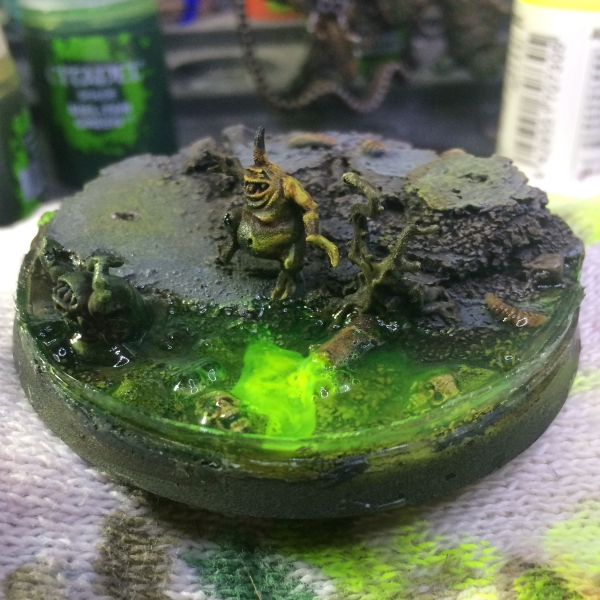 For this one I repeated the same as above, the initial dispersion really sells the glow effect. But I waited three hours for it to semi dry to a gel state and then I added more flourescent paint (a second wave). There are some clear beads in there for bubbles and some dark wash around the edges and far side of the Nurgling.

So then I just needed to finish painting him… 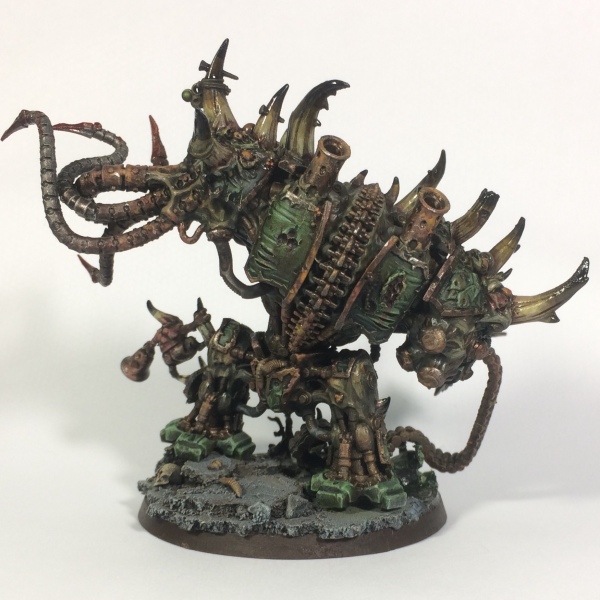 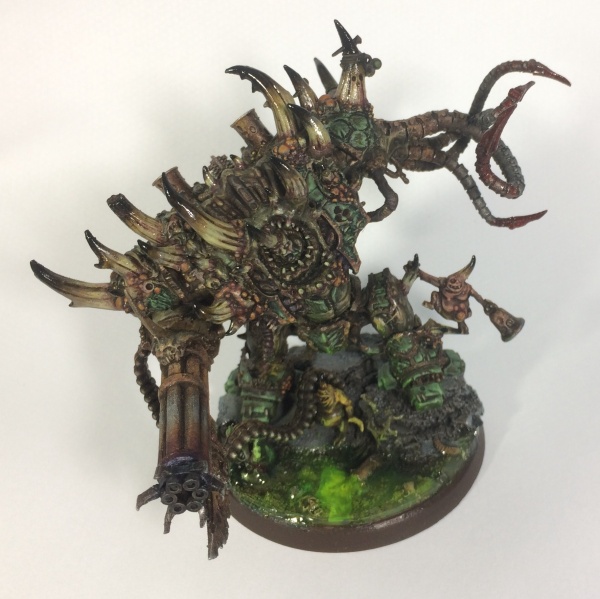 I’m really pleased with him. He was the result of basically a wave of inspiration from start to finish. There is a whole load of stuff in there I’d never done before. Rode my luck several times along the way.

He is also my Jewel of July painting challenge (emerald if your asking) for Azazel’s blog.