Kjarl Grimblood loves fire, his company cover their faces in blood after killing an enemy with flames. He’s rumoured to have ‘the gift’ (psyker), he sees the future in fire. And he has 12 land raider redeemers (in the West Indies). Did I mention he loves fire?

For me terminator armour and land raiders go hand in hand. The combi-flamer for the fire thing again.

An amazing conversion of Erik Morkai online made me think (wrongly) I could use Njal Stormcaller as a basis for my Kjarl. I love the wolf head on top of the armour. It’s a really classic look, But that conversion was too difficult. Proper respect to Adrian Walters for pulling that conversion off! At the same time Logan Grimnar had a new awesome plastic model with tons of detail. So my converted Grimnar was suddenly surplus to requirements. So I harvested him for bits. His giant axe becomes my Bjorn Stormwolf’s giant axe. His forgeworld torso I use for Kjarl. I really like the nobility that face has. Although  pulling apart my Grimnar left him needing a nose job ( I accidentally removed his nose with pliers). Also painting half his face with blood possibly takes the edge off his nobility.

I based Kjarl on this pic from the 2nd edition codex. He’s got that fantastic Wolf head on the armour. An old veteran look and a thunder hammer. I figured the thunder hammer could be a blacksmith fire flames hammer sort of thing. On closer inspection this isn’t Kjarl Grimblood but Kyrl Grimblood (so embarrassing).

So I didn’t have to use the Thunder hammer (Engir already had one, and it’s not like an axe and you can just give every space wolf one). 8 of the Wolf Lords in the project have axes so this was an opportunity for something else. One Wolf Claw is a good look. But it was Game of Thrones that gave me the sword idea. Visions in the flames! It’s gotta be a flaming sword. The sword is a custodian sword with a wolf head from a Wulfen axe. I liked that wolf head as it reminded me of Kjarl’s company badge, so I turned it 90 degrees and bodged it in place. Green stuff and paint scheme to finish. The emperors sword (wielded by Guilliman) had just come out so I could just copy that. 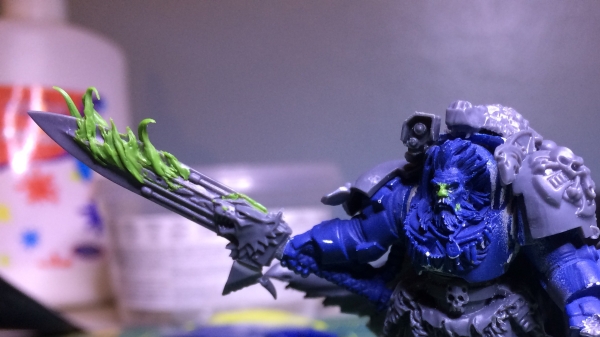 I had a bear head left over from my Gunnar conversion so I could try to replicate the classic look with the use of the Chaos Lord Terminator cloak. It’s frayed but could pass as burnt (fire!). I was also using the Wolf Guard terminator cloak twice already (Gunnar and Bjorn). 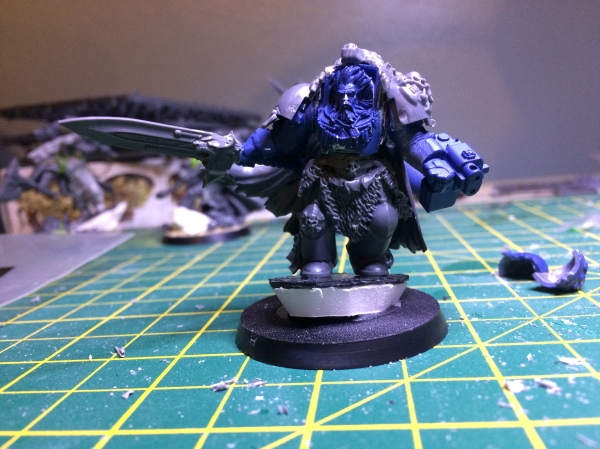 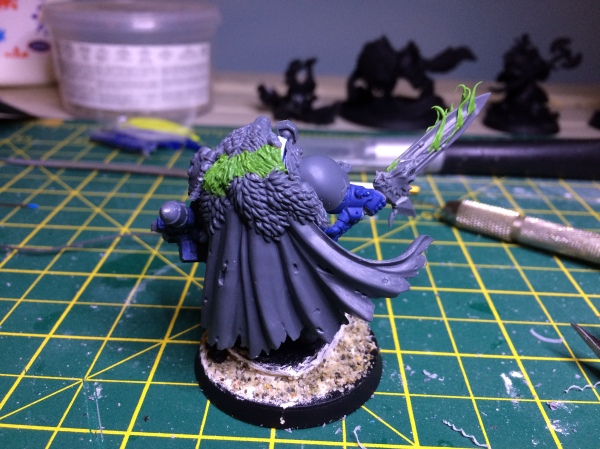